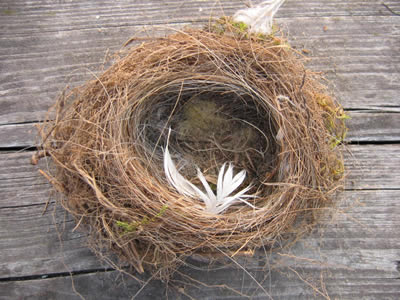 As I sat in my rocking chair not long ago, I vividly recalled scooping a sobbing child into my arms and crooning, “Ohhhh honey, it will be OK.” Somehow that simple phrase miraculously erased anguish and neutralized the cares of the world. Within a minute or two my daughter would jump back into life and happily resume the task of growing older.

But one day, not long ago, the tables were turned. The tight throat and brimming tears belonged to me. There was no one to whisper, “Ohhhh honey, it will be OK.” When the last of my four daughters stepped boldly into the role of a college student, I was painfully unwilling to accept the title, Former Mom. I was intimately aware of my emotions — all in conflict. Collectively they represented the acknowledgment that life would never be quite the same.

The sobbing child had grown into a beautiful woman, self-confident and self-sufficient, who was now embarking on life without Mom. She will eventually find a partner to croon “Ohhhh honey, it will be OK,” and someday I hope to watch her croon the same phrase to a child of her own. But on that day of separation, I was unneeded in the role.

The conflicting emotions were not rooted in a sense of regret from the expressions or activities omitted — we were careful to preserve the moments and save time for the important stuff. Our collective memory is filled with many wonderful times. I had reveled in the job I had held for twenty-three years — that of “…my kids’ Mom!” The future job description, however, was just too undefined for my comfort. I had been promoted out of the position of Mom, against my will, and without my permission!

Needing some time to cogitate, I prepared a cup of herbal tea, which is my grandmother’s solution for everything. I liberally seasoned it with tears. While I nestled in my rocking chair, I attempted to define who, and what, I would become.

I didn’t foresee completing the task, or delegating the job of motherhood to someone else. I had observed my 89-year-old Grandmother remind my Mother of simple living skills, and she continued the tradition with me. Our jobs as mothers are never completed. I will continue the tradition by reminding my girls of “Mom-stuff” throughout the years, without a passing thought of ever retiring from the process.

My daughter would continue to need my encouragement, advice, and support throughout her life. Though these needs would not be as acute, or as constant, I would still represent a feeling of comfort to her. I would be needed in new areas, previously un-discussed when we were mother and child, but open as our life perspectives change.

I wasn’t un-loved. The relationship we had enjoyed through the years transcended the definitions “current” and “former.” However, love will be from a distance instead of up close. Long conversations will be conducted via telephone instead of over a leisurely cup of tea. Hugs and smiles will be visualized instead of experienced in person, but they are no less real.

Transition became more difficult with each successive child. When my older children left the nest, I still had younger children to mother. But as my youngest left, there was no object of my loving affections, except myself — and that just didn’t seem adequate.

My responsibilities had evolved from a full-time position to simply being on call. My job title had been exchanged from Director of Daily Operations to that of Past Director, Retired. The umbilical chord of flesh and blood had transitioned through face-to-face communication but had now denigrated to E-mail, snaking its way through cyber-space. The realization came that my job will be to watch from the gallery as an exciting life unfolds for my youngest. Nevertheless, that did not diminish the sense of loss as she stretched her wings outside of the nest.

As I settled into the rocking chair and sipped my tea, I practiced reassuring myself with that miraculous phrase, “Ohhhh Honey, you’ll be OK.” It took the consumption of several gallons of tea, countless miles in my rocking chair, and innumerable self-assurances to understand the full implications of former motherhood. At last, I’m able to share my experiences.

I awoke from a Sunday afternoon nap, something I undertook as pure luxury instead of total necessity. I’ve become convinced that life as a grown-up Mom is, in actuality, really wonderful! It has been a month since my youngest child was launched into the world and I entered the ranks of other moms whose children have gravitated, or graduated, to their own orbits.

The first few days were admittedly difficult and yet, over time, I have made some remarkable discoveries. As a mother with no small children at home, I can consume vegetables as a source of enjoyment rather than a source of vitamins! I can stay up as late as I want without being a bad example. I can eat cookies and milk before dinner, or even instead of dinner, without the fear of creating anarchy, or poor nutrition, in a future generation! I can read an entire book without answering questions or stopping to make lunch. I can make decisions with no regard for when anyone in my care who needs to take a nap, or will wake up from one! I can shop without the added distraction of continually counting children as I meander through each aisle.

As a mother with no teenagers at home, I can clothe myself without a running commentary on the state of fashion to which I do, or do not, conform. I can go to bed as early as I like without fearing I will lose the respect of teenagers who never get tired. I can enjoy an entire day without answering questions that begin with “why” or “when.” I now live by whim, which is whenever I get in the mood, instead of “when,” which my children assured me they needed to know.

Lest you think my lifestyle is totally hedonistic, admittedly there are some drawbacks. I am no longer the beneficiary of utter devotion to errands that my teens developed when they received their driver’s licenses and am reduced to running errands by myself. Although I do not need to make lunch, I don’t get to eat lunch unless I cook — something formerly unnecessary because I could always count on a daughter experimenting in the kitchen to my benefit. My cup of tea in the morning is not quite as sweet without the words, “Morning, Mom” and yet I know they waft through the air, at least in thought.

I finally regained ownership of my life and find that the title Former Mom includes some awesome perks! And I must say, I’ve earned the right to say, “Ohhhh honey – You’ll be OK.”