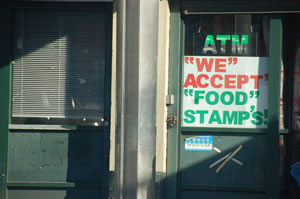 Growing up in a small town in the Northwest, my greatest food concerns were whether Twinkies tasted better frozen and if eating cabbage soup for a week would really erase the memory of those Twinkles from my thighs.

Flash forward twenty years and I’m staring into an empty fridge. My children would like me to make grilled cheese sandwiches but we’re out of bread and cheese. No use doing a ‘binner’ where we eat breakfast cereal for dinner because there’s no milk. I quickly discard the idea of making some fresh French bread loaves because there’s no yeast and no oil. So, cataloging the pantry, I see a bag of flour, some spaghetti noodles (no sauce), strawberry jello, and a can of olives. I’m wondering if they’d eat some spaghetti with butter and olives (how very authentically Italian) when my husband arrives home from work. A vibration of fear travels up my spine at the expression on his face. Quietly, while they kids eat their spaghetti ‘puttanesca’, he tells me that the plant is shutting down for another two weeks. Things could not look any grimmer.

We knew when we married that we would be poor. Well, we knew we wouldn’t be rich. I had the degrees and he had the steady job that paid just enough to support a family. I wanted to stay at home, most of the time at least, so that left us in a financial corner. We bought our cars in cash, used. We bought a tiny house, used. We lived without cable, cell phones, or the internet. Proudly off the grid, we raised our children without iPods, game boys, or the Wii. Things were fine, things were good. I kept a part-time job in this library or that and there wasn’t a moment where we ever wondered how we would pay for essentials. ‘Poor’ was not ‘desperate’.

Along with most of the country, we felt the economic downturn first hand. One plant closed and a period of unemployment drained our savings. As soon as the next job was secure, it seemed the layoffs began. My part-time job kept us in the basics with a little bit left over for trips to the local water park for the day or art classes for the girls. We still considered ourselves lucky to not be in a position so many other Americans found themselves: unable to pay the mortgage and homeless. When I started to feel sick, tired, and achy, I figured it was the result of too many nights up with a baby. Our six month old still nursed frequently through the hours he (and I) should have been in dreamland. The symptoms dragged on and the day my husband’s fried onions sent me running for the bathroom, I finally clued in. Between wondering how it had happened and how to tell my family, I worried what a new baby would mean for our finances.

Skip ahead to shortly after our baby was born and I realize that returning to work two weeks postpartum was a colossal mistake. Being only part-time, I had no Family Medical Leave Act to protect my job. They offered me a week off and I bargained for two. But as my body screamed out for rest and my baby struggled to switch from nipple to bottle and back again, I knew it was only a matter of time before I stayed home for good. I gave my two weeks notice with exhilaration, relief, and fear. The budget would have to be slashed, as they say in Congress, but where?

The night my husband told me that we would be losing half of our tiny income, I realized that I could either go get a full-time job and he would stay home or I could see what the government could do for me. I didn’t ask my husband’s opinion. Not because I was angry with him or thought he wouldn’t have anything to say, but because I knew that I would be the one leaving a newborn and a toddler with a full-blown case of separation anxiety. One sleepless night and I was ready to humble myself. I was ready to do something no one in my family, circle of friends, or wider circle of acquaintances had ever copped to: apply for food stamps.

The first meeting with the state social services was fairly smooth and painless. I filled out forms, made copies, and filled out more forms. I declined the cash benefits application because it seemed that the paperwork was immense and there was job training involved for every adult family member. Somehow I didn’t think I would glean much from a weekly class on how to attain a GED or plan a family budget. The second meeting, this time with a case worker assigned to my application, gave a glimpse into the Dante-esque inner workings of the office.

My case worker asked me to sign a paper stating my husband worked forty hours a week. "They’ve laid them off one day a week, so it’s really only thirty two, and one week off a month," I corrected, trying to be helpful. In response, the whole application was put on hold for three weeks while they verified it with my husband’s supervisor. The case worker refused to process the papers with forty hours, even though we would be receiving less benefits than we were entitled to. Finally, in a third meeting, where I again proved the identity and nationality of every family member, I signed and swore that everything I had written down was true. I was told the very last step was to wait for the decision letter. By law they had ten days to notify us. It arrived close to two weeks after the last meeting. All in all, six weeks had passed since I had first applied for food stamps. Good thing the kids like spaghetti.

When I opened the letter, I remember my heart pounding with fear. The number inside, like a lottery ticket, would decide whether I would be leaving my children for eight hours a day or not. I could never have imagined that the amount we would be given each month for food alone was almost twice our monthly mortgage. I was overwhelmed with gratitude. We had hit the jackpot.

The first time I used my new card, I went alone. I picked a few small items and went through the check out, nervously entering my secret pin. If it didn’t work, I would still have enough cash to pay. A few days later I picked a few more items, fresh vegetables and garlic bread. My palms were sweaty and I felt like I was attempting to rob a bank. Could they tell how nervous I was? Could they see my excitement?

A few more run-throughs and I was ready to take someone along for the ride. The kids love the grocery store for the free bakery cookies and my nine year old daughter jumped at the chance to ‘go get some milk.’ We wandered through the bread aisle first and I put bagels in the cart. Big, soft, plain bagels. Blueberry bagels and cinnamon raisin bagels. Her eyes widened and she asked what sort of cookies those were. ‘You’ll see,’ I said. Next was the freezer section. I chose bags of frozen peas, sliced strawberries with sugar added, pie crusts, concentrated cranberry juice cocktail, corn on the cob, tater tots. I noticed her chewing her thumb. ‘Mama,’ she whispered. ‘What are you doing?’ ‘You’ll see,’ I smiled. Next the canned food. Into the cart went chunky soups that didn’t need water, sliced pineapple, mushrooms, chili, SpaghettiOs, diced tomatoes, tuna, baby corn. ‘I want to go home,’ she whispered, her pupils dilated in fear.

The bottom of the cart was full but what I thought would be fun was scaring my child. I hadn’t realized that she was so aware of our financial situation. We took a break at the end of aisle six and I showed her the card, explaining what we could do with it. ‘Anything?’ ‘Pretty much anything.’ ‘Wow.’ She held it in her fingers like it was breakable.

If you’ve ever played the ‘what would you do if you won the lottery’ game, then you’ll know how we felt. I asked her if she wanted to pick something this time and she headed for the produce. A six ounce package of out-of-season raspberries was almost seven dollars, but in it went. Then she chose items for her sister (grapefruit, hot dogs, cream cheese) and her brother (macaroni and cheese shaped like cartoons, Oreo cookies, chocolate milk). She actually clapped her hands with excitement when she got to choose the kind of jelly (raspberry) and peanut butter (honey). She put in oatmeal, sugar, and raisins to make her dad his favorite cookies. ‘Mama, I love this man, the one who gave us this card.’ ‘Not a man, it’s from the government.’ I carefully explained once more how we as a family fell below the poverty line and how I had decided to apply for food stamps rather than find another job. ‘Ok, the government man. I love him. Can we get yogurt?’

It’s been two months and I still haven’t gotten used to the idea that nothing in the store is beyond our reach. Cinnamon was as valuable in our house as it was in Columbus’ time and now I’ve got whole sticks and powder. Food has become a joy, cooking is a singular comfort. Although we’ve settled back into our usual fare of pasta, sandwiches, and casseroles, I still experience a little thrill every time I slide in a package of organic eggs or fresh parsley. After years of making lasagna with the cheapest ingredients, it’s pure indulgence to use real ricotta cheese. Of course, there are items that don’t ever make it in the cart, even if they are ‘free.’ The day they make the doughnuts without sugar and fat is the day I buy a dozen for breakfast.

I will never regret applying for government benefits, something I’m sure no one in the history of my family has ever done, coming from a long line of white collar professionals. I’d like to say that I filled out all those forms for my kids, but it was really for me, my own sanity. It’s a fact that many women work full time jobs weeks after giving birth and most do so willingly. But I’m fairly sure I would not have survived. I was close to nervous collapse, psychologically fragile, sleep deprived, and mentally exhausted. Something had to give.

My husband has been interviewing for different positions in the area and I know we’ll be giving back our plain blue plastic card some time in the future. But for now, I’m savoring the government bounty. I have to say food stamps rock my world.