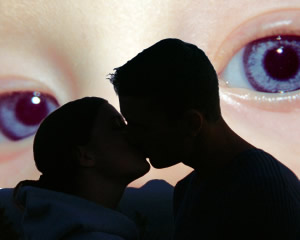 I was driving in my car, listening to the radio, when a local radio station announced that it had been polling the audience all day asking them to vote for the #1 Romantic Movie of All Time. And then it proudly announced that the winner of the poll was none other then…drumroll please…GHOST.

At first, I thought, that I agreed with the voters’ choice. After all, Ghost is funny, thrilling, original, scary (anything with Whoopi Goldberg usually is), and sexy (yes it’s hard to forget Demi and Patrick in Pottery 101). But as I was driving along listening to the disc jockeys rattle off their own personal favorite romantic movies (Titanic, Casablanca, The Bridges of Madison County, The English Patient, Gone With The Wind, The Way We Were, Love Story, and others) I was immediately struck by the irony in their choices. Is it possible that in movies, the most romantic scenarios aren’t those in which lovers are united for life, but those in which lovers are kept apart for eternity or die young?

I began to laugh out loud in my car.

“What’s so funny, Mommy?” my inquisitive daughter asked from the back seat.

“Oh, nothing sweetie,” I said. “The man on the radio just said something really silly.”

Let’s face it, our entertainment providers do not believe in the notion that marriage, or a lifetime commitment to one person, is sexy or exciting. In fact, in Hollywood dying young = romance. Separation is sexy. Disaster is destiny. Fatalism is fabulous. That’s the way Hollywood scribes write them. And that’s what we, the American audience, apparently like them.

Let’s take a closer at our top romantic choice, Ghost. We fell hook, line, and sinker for the romantic notion that “true love transcends even true death.” We were truly enchanted by the site of a perfectly preserved Patrick Swayze reaching out to his gorgeously, grieving Demi Moore across the vast canyon of eternal death. And it broke our hearts to imagine that these two exquisite lovers would never again be entwined together in life (or covered in clay).

Ever since Shakespeare’s Romeo and Juliet, beautiful star-crossed lovers cruelly kept apart by fate have become an entertainment romantic staple. And apparently, the keys to a successful romantic weepie are both youth and stunning beauty. In the latest (s)weeping epic, Cold Mountain, a china-doll-like Nicole Kidman shares an erotically-charged passion with the silent, yet sensual, Jude Law. And long before the credits roll, you just know these two are NOT destined for a joint bank account or a retirement condo in Miami.

Why can’t celluloid lovers sustain a long-term marriage or affair? Why must one lover die young, in order to remain sexy? Why do our movies romanticize early death in a way that makes it look far more enticing than say, simply having a spouse, some kids, a dog, a house, a job, and a simple future?

The truth is, as all of us old married couples with kids know, that it is difficult to keep the romance alive in any relationship. Time, coupled with familiarity, is the great destructor of ooey gooey romance. Maybe that’s why we love our unrealistic romantic movies. In films, there is a spark between a woman and a man and then a burst of intense heat and fire. But we never see the fire flame out. And because of that, we the audience, are allowed to fantasize that the heat burns forever.

Of course in real life, we know that it is impossible to keep that intense fire burning forever. Especially without exerting a ton of effort to keep the logs burning. And that’s what really irritates me about Hollywood romances. They never exert any effort at all to keep the flames going. In fact, they take the easy way out of a dying romance, by well — dying (or bolting) themselves.

Unlike the non-effort of Hollywood romance, in real life the romance, TRUE ROMANCE, is in the actual stoking of the flames. It is the very details of everyday life, and the effort involved in reconnecting with your partner, that define a true and lasting love. Love doesn’t always mean you want to rip the clothes off of your spouse and go at it like two baboons in heat. Love means making a long-term commitment to a partner and building a lifetime of memories together (good and bad).

Hardly. But I think it beats being married to a sexy ghost.