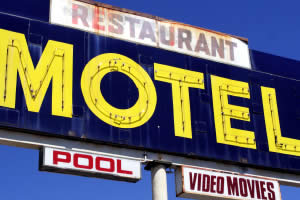 Family vacations are as American as apple pie, and as seasonal as watermelon. As we bask in summer sun, warm weather and fun brought on long, lazy days, many Americans are embarking on the age-old family vacation. Last year Americans took 325.6 million leisure trips during June, July and August and 40% of the longest trips included children or grandchildren. My advice to these vacationing families: watch out! Family vacations are not for the faint of heart.

Trust me on this, as I speak from experience. Looking at my family’s vacation history you would wonder what we did to upset the travel gods or even more astutely how the four of us emerged from these adventures unscathed.

Our annual two week vacation to Hilton Head Island, South Carolina had included the usual land mines: sibling bickering, a long car ride, and one year a hurried hurricane evacuation that found my father driving our sedan down a bike path. However, on the whole, the trip — planned by my mother with military precision — went smoothly; packing was done early, the car was ready the night before and the morning of our departure we hit the road at 4:00 am.

I wish I could say you’d find us playing roadside bingo or buoyed by carload sing-alongs; the truth is that once we were en route my brother Adam and I promptly began fighting over space, we taunted each other, then our parents, we whined for food breaks, bathroom breaks and to change the radio station. One year we even installed a suction cup basketball net onto the back widow in an effort to play hoops. Needless to say it didn’t last long. However getting beaned with a basketball while driving a major interstate was the least of my parents’ concerns as our family vacation track record was on par with the Buffalo Bills Super Bowl run of the early 90s.

Our Niagara Falls vacation included a day trip to the ER with Adam who insisted he was unable to walk one morning. Six hours and one lollipop later he left with a diagnosis of growing pains.

A supposedly serene trip to Texas Hill Country found my father with bronchitis so severe that coughing ruptured a blood vessel in his eye. Despite having one functioning eye he insisted upon running across four lanes of Texas highway traffic to retrieve a hubcap from our rental car. Avis, take note, the man felt more inclined to risk his life than pay an additional car rental fee.

On a cruise to Bermuda we were caught in a tropical storm. The pools were emptied, the vast majority of the passengers got sick and Adam and I marveled at how quickly the view out our porthole went from ocean to sky and back again.

In Hawaii the four of us were swept out to sea when we lost control of a large raft we rented. We eventually navigated ourselves to a rocky peninsula where the raft company tracked us down only because we had exceeded our rental time. During the debacle I lost a rented flipper and was forced to dive to the ocean floor to retrieve it because (you guessed it) we wanted to avoid an additional fee.

There was the hotel room we stayed in where turning on the air condition released a torrent of gnats. We caught and killed as many as possible and my father swiftly deposited them at the front desk. Rented condominiums were always a concern as well – we stayed in a series of questionable accommodations that included paper-thin walls and eau de mildew.

Yet, we not only lived to tell these tales but lived to laugh about them. And I’d say that enduring these vacation traumas made us into a stronger family unit. We are in some ways a fraternity of unlucky vacationers, and proud of it. We earned our stories, antics, and inside jokes.

There’s no better time than childhood to learn that paradise isn’t always paradise, and even if it is you may get bronchitis while you’re there.

With that in mind pack up, chin up, and enjoy your summer vacation adventures, America. And if you spot my family wherever you are, steer clear!