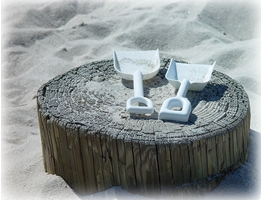 My husband is going to Turkey for a month and two days, leaving me alone with our four-and-a-half-year-old daughter and the one-and-a-half year old baby boy who will not permit me to step into the shower. Ostensibly Greg is going to Turkey to research his next play, a musical that just happens to take place at the Topkapi palace in Istanbul, but I’m not fooled. I see how he licks his chops when he considers leisurely meals consumed in restaurants, the books read without interruption, and thirty-three nights of delicious sleep.

Even though I’ve given him my blessing, I can’t quite believe he’s going to leave me alone with these two for a month. The next time his mother observes that young fathers today are so wonderful, so much more helpful than they were in her day, I may have to pinch her. For a month and two days, her son is ditching his fair share of shampooing tiny protesting heads, boiling macaroni and cheese, answering interminable piping questions, cleaning the unending mess, reciting that damn “Wheels on the Bus” board book ad infinitum, and hauling the cinderblock of diapers, crayons and juice boxes to and fro.

Fearing what I am becoming, I hatch a plan. Not only will I send all of our laundry out and hire a former drag queen that a friend met in the Tompkins Square dog run to scrub our apartment free of the filth that has accumulated since Milo’s birth, I will take the kids somewhere warm for Inky’s spring vacation from nursery school. Everyone will tell me I am crazy for taking two small children on an airplane unassisted. I like that. It feels good to be considered crazy, tough, punk! It sure beats the pants off of “soccer mommy”. I’ll go on the Internet and find some cheap tropical spot a few hours flight from LaGuardia with no swimming pool for the kids to drown in while I read Crime and Punishment in hastily snatched paragraphs. As long as it’s walking distance to a sandy beach. The kids can eat bananas all week if there’s no macaroni and cheese available. My mother warns me to book soon because the whole country will be on spring break that week. That’s fine with me. Maybe we’ll head for Daytona or Fort Lauderdale. I have visions of an endless supply of volunteer babysitters, tan college girls in bikinis who will horse around with my fatherless children until their presence is required at some poolside bar’s daily wet T-shirt contest.

Riding the F train home to Brooklyn, I come up with an even better plan! The subway car is plastered with ads for Club Med as a family destination, little kids splashing around in snorkels and what looks like a harness outfitted with angel wings. Eureka! I will dial Club Med’s 800 number and identify myself to whomever answers as a journalist who writes about parenting issues! I’ve heard wondrous tales about Disney’s bottomless feedbag – the deluxe complimentary weekends lavished on reporters who worm their way onto the Mouse’s press list. A trip to Disneyland with my crew sounds about as relaxing as a visit to the abattoir, but surely Club Med would be different. When Inky was Milo’s age, my mother sprung for tickets so we could accompany her to a friend’s wedding at the Maui Ritz. I was a budget-travelling snob of the highest degree. Having slept in the train stations of Europe, backpacked around Asia, and suffered through malaria and explosive diarrhea in Rwanda, I couldn’t understand why on earth anyone would seek out a travel experience as accommodating and sanitary as the Ritz. Oh baby, now I know. Given the choice between trolling the bazaars of Varanasi accompanied by two unpredictable sidekicks with sticky fingers and a penchant for being carried and sprawling on a chaise lounge like a more maternal Zelda Fitzgerald, watching the little ones gambol on a plush lawn where no cigarette butt or bottle cap is allowed to linger, the decision is a no-brainer! I still weep thinking about the Ritz’s endless supply of thick terry cloth towels, the professionally pleasant waiters wandering the grounds proffering slices of fresh pineapple.

The only fly in the Club Med ointment is the matter of my credentials. Technically, I do write about “parenting issues” but I do so in a quarterly zine of my own publication. I hand write the entire thing and staple together the thousand or so copies I’ve had Xeroxed on the dining room table after the kids are asleep. I’m not sure that the person who handles Club Med’s publicity would see that as a worthy return on their investment. Occasionally I contribute to some higher circulation zines, so glossy and well laid-out they might pass for “real” magazines. Maybe one of their editors would spot me some official letterhead on which to make the request. One of these publications reviews vibrators; the other boasts on its masthead that it is “better than a Prozac latte”.

Days before Greg is due to depart, a deus ex machina arrives! An editor at a mainstream baby magazine wants to take me out to lunch! I am so dazzled by the three course meal at what I can only assume is a hot new restaurant that I forget to pitch my story idea, “How To Take Your Baby To Club Med”. The next day, the editor calls and assigns me a piece wherein I must come up with 12 baby personality types to correspond humorously with the signs of the zodiac. The rest of the issue will be devoted to ads and crib reviews.

I get a second chance when a friend from college calls to announce that in a moment of supreme recklessness he has purchased a mansion in Savannah. He got it cheap because it is only halfway renovated. He doesn’t have any furniture or even any pots and pans, but we can come if we want to. I ask Inky if she would like to go visit Handsome Uncle Dick with me and Milo. When she hesitates, I throw in a free sand bucket and shovel and the matter is decided, even after Uncle Dick calls to invite us to back out. He cites lead-based paint chips, high-pressure hoses and extension ladders as well as his own stressed-out frame of mind. I close my eyes and see my children squealing happily as they chase each other through empty rooms with high ceilings and white curtains billowing in shafts of dusty sunlight. Besides, Handsome Uncle Dick helped raise a younger sister and has a facility with babies that would be remarkable even in a heterosexual man with children of his own. He once changed Milo’s diaper completely unbidden. Nervously he ventures that since I’m the self reliant type, maybe I can take the kids to the beach 25 miles away every day, if I’m so dead set on coming. I will rent a car and remember how to drive it. I will remember to bring lollipops to appease my subway-raised children in their car seats. We will sleep on the floor and keep the lead-based paint snacking to a minimum. Our tickets are non-refundable. We are going on vacation and when Greg comes home, he will hear all about it.