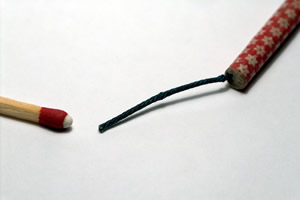 Two days ago, my seventeen-year-old son, who lives in a state of bedroom chaos and confusion, decided, on his own, without prodding from me, to clean his room. Jeff started by taking the doors off his sliding-door closet so he could move more freely around his room while reorganizing his disorganization. The doors were moved into the hallway of my home. At that point, all traffic came to a halt. The Prager residence remained in gridlock for two days, until I finally put my foot down and demanded instant relief. My husband and I lifted the doors and placed them across Jeff’s bed, thus keeping him from sleeping until his room renovation was complete. He has been sleeping on the floor among old Lego, Erector pieces, books, dirty and clean clothes, and a variety of anime and computer magazines. The doors are still across his bed, and when I ask if he’s close to getting his chaos and confusion under control, his answer is, "Rome wasn’t built in a day, Mom."
Last week, my fourteen-year-old Steven found out his best friend and constant companion was moving back to Texas in a matter of weeks. This is the best friend who has the same inquisitiveness and nerve as Steven and accompanies him on many adventures into the desert and beyond. They invented the phrase "No Fear" for children like these. We’ve been quite lenient with the time he spends with this friend, allowing Steven to stay out longer and have as many sleepovers as he can fit into a week, just so that he can spend as much time as possible with this soon-to-be-long-distant friend.
The other day Steven came home with a baggie filled with about a hundred little firecrackers. I saw him lead my husband into his room and heard my husband say, "Just don’t show your mother."
My husband knows about a student I had when I was teaching who was killed when a non-thinking young man put a firecracker into a fire extinguisher case. The firecracker exploded. Shards of glass went flying. My student was killed when a small shard hit her in the jugular vein. I watched her bleed to death as paramedics tried to get her to the hospital. I held her hand until there was no life left in it. It changed my life.
There is no discussion about firecrackers with me. I don’t waiver on the issue.
So when Steven showed me the firecrackers anyway, even though Dad told him not to, because he has a hard time lying and still has a child’s enormous level of guilt, he shouldn’t have been surprised at my reaction.
But my husband said he could use them with supervision, and the discussion had been going on all week.
“When, Dad?”
“Soon.”
“But when, Dad?”
Last night Steven and his buddy who is moving went back and forth from our house to his house dozens of times. On one trip, one of the boys rode his bike over something lumpy on the sidewalk. Upon further examination, they discovered it was a dead rat. There was a disgusting amount of excitement when they told us the story. They also told us that they wanted to blow it up, since it was already dead and it was only a rat.
My stomach turned, and I gave my husband that look that is supposed to make him agree with me. He was looking in the opposite direction, deliberately avoiding my range of vision.
“Think of the rat you found in the pool, Mom,” was my son’s reply when I said, “Absolutely not.”
“Think of the rat that ate through the wires of our alarm system in the attic and how much it cost to fix it, Mom,” Steven pressed on.
With my husband, the child who will never grow up, along side them as adult supervisor, they took a handful of their firecrackers and arranged them, using punks to delay the lighting of the fuse, and they blew up the rat carcass in the street.
My husband had his 35mm camera with him, and with special lenses I bought him for close-up photography of all things beautiful, like flowers and little children, and film that works only in the dark, he photographed the exploding rodent.
I stayed home and watched Jeff continue to clean his room. It was a tough choice to make – exploding rat or reinvented interior design — but the chaos and confusion in Jeff’s bedroom was easier for me to deal with.

It’s no wonder I’m exhausted at the end of the day.