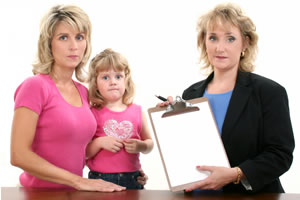 Friend got the letter all parents dread. The teacher would like to see her to “discuss her daughter’s behavior”. Teachers don’t write that letter unless they believe your child is one infraction away from the “Big House” or they’re nearly bald from pulling their own hair out, follicle by follicle, in frustration. To be honest, I don’t know how the teacher has coped up until now. I’ve always thought Friend’s Daughter was a bit scary. She has that Damien-esque quality about her. Not exactly sure what it is, but it has something to do with the combination of the pale skin, large forehead and those eyes that change color like some biological mood ring, from black to green to red. I’ve always tried to keep my distance. She might only be five years old, but messing with the Anti-Christ is really not what I need right now. It’s been a long, unkind year.

Friend reluctantly went to meet the teacher. Once there, she was told that her daughter is a menace because 1) she buried some child’s shoes in the sand as punishment for not playing with her and 2) she threw a stone at a child because he called her a dog. I nearly called the teacher myself to tell her to be thankful there were not any impaled crosses or black birds bent on pecking out eyeballs. Most of life is relative and shoes buried in the sand are pretty mild, all considering. But then the teacher put on the “stern face”. We all know it. It’s the one they choose when they are going to tell you why you are a crap parent and how they are the font of wisdom. So the problem with the Anti-Christ-In-Training, according to her teacher, is that she doesn’t get enough attention at home, this despite the fact that she is an only child who not only demands to be the center of attention at every gathering, but threatens all in attendance with physical violence if she doesn’t get it.

Nevertheless, Friend is in a tizzy because the professional has identified her as the problem. Okay, let’s put aside for a moment the intervention of the forces of evil and lets, for the sake of argument, assume that this child is not possessed. How on earth did this “child professional” come to this conclusion? Is there a secret book somewhere kept only by teachers and guests on the Oprah Winfrey Show that has a flow chart on which various behaviors are listed that by following the arrows would lead you to the problem?

For example, your son has just slapped his sister with the dog. Follow the arrow and you get to the question – “Was he smiling at the time?” Yes. Follow the arrow once again and you have – “Was the dog black, brown or white?” The dog was brown and you veer off to the left of the chart and, plain and simple, the cause of your son’s inability to use a dog in an appropriate fashion stems from your failure as a parent to relate to your child on a cooperative, interpersonal, racially demotivated, eco-friendly way. If there’s no secret book, then why is it everything that our children do nowadays stems back to us? It never used to be like that.

In third grade when I wrote mean notes to a perfectly ordinary girl called Lisa, calling her Mona Lisa, knowing full well that by doing so she would burst into loud, uncontrollable tears, much to my and my friends’ amusement, nobody told my father that I was an evil degenerate because he didn’t hug me enough. They told him I was an evil, degenerate. Full stop. He decided the rest, and it involved a wooden spoon landing several times on my quite tender bottom. Don’t get me wrong, I am not advocating the beating of children — I’d like to make that perfectly clear — especially if your child has any connection with the evil underworld. It may very well come back to haunt you, or more importantly — me. I’m just saying that couldn’t it be that Damien just wanted someone to play with and didn’t like being called a dog? Why are children so deep such that everything that they do is motivated by some hidden psychological defect? I know when I go to the supermarket and some idiot pushes her cart ahead of me in the queue, when she can see full well that I have two items and she has a hundred bazillion, and then I purposely, accidentally, ram my cart into that tender back part of her ankles, I know I’m doing it because she’s a jerk and deserves it. That’s it. No deep-rooted issues about acceptance or self worth.

I really don’t see how someone as shallow as me or Friend could have produced children so multi-leveled only professionals with secret books can decipher them. Really, in the end do we, as the adults, want to admit that our parents had that same sort of effect on what we eventually became? Do you seriously think that your father, who resembled part of the lounge suite and who spoke exactly three words to you during your adolescence — and two of them were “no” — determined how you relate to the entire male species on planet earth? Or how about your amazing mother who could give you a whole soliloquy on the evils of mini skirts while balancing a cigarette out of the corner of her mouth — was she the one who defined femininity for you? Do we really think they were the main contributors to the basic foundation of our personalities?

Of course not. They were, frankly, pretty irrelevant in the scheme of things. So, rest assured, secret book notwithstanding, you are just as irrelevant in your children’s lives as all of the parents in the history of parents that came before you. Now, doesn’t that make you feel so much better?