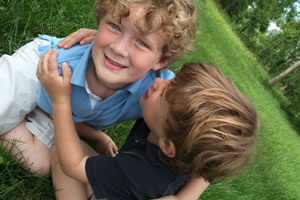 I wanted my son Nathan to have friends. Whom he likes, I must like. Nathan would do anything to have Michael play with him. His version of trying to play with Michael is to stand next to me and hold my leg. But I know how desperate he is. If it’s Michael’s friendship he wants, here I go.

I stay at school when I drop Nathan off, and try to stand casually, in proximity to Michael’s dad Scott, the stay-at-home kind. Michael’s dad laughs nervously. We have little chitchat, like we’re in a bar in college, and instead of drunken coeds it’s tiny tables filled with glitter and scissors, and everyone is less than three feet tall.

Michael’s dad reminds me of my first boyfriend, Thomas. Huge. Probably rode a motorcycle at one time. Still awkward around girls, and we’re both pushing 40. It’s not really that cute. It’s cute that I’M awkward. I’m a girl. He is holding a baby, which helps. As I scoop some conversation out and apply it to his skin, we’re not meshing. I’m meshing. He’s out of the mesh.

Luckily Michael is in love with me. He has no friends either. He’s only five. I have to initiate asking Scott out to the zoo with Michael “sometime,” his eyes not meeting mine for very long, nervous laugh, a “yeah, that’d be great,’ me saying “I can get us in for free, I have that pass –“ him saying ‘Oh, yeah, we have that too –” I say “Oh yeah, of course, I guess we all have THE PASS, yeah,” nervous laugh, “maybe next Friday.”

I also start dating Niles and Lily at this time. They’re the slightly off-center couple, a tall chick and a short British dude. He dyed her hair several different colors in the first few weeks of school. Their daughter is Charlotte, a Disney princess, with fair skin, dark hair and beautiful dimples. I start talking to Niles because we’re always there first to pick up our kids, alone waiting for the doors to open. I have befriended the only two men that come to pick up their kids. No, the only two men my AGE. There are dads in their twenties, but I don’t even speak the language. I just watch them on their Pretty Cloud, while I’m over on Tired and Old Cloud.

Niles and I talk about babysitters, we both don’t have one, and then he’s telling me we should swap each other’s kids. I say I’d love to but Nathan never lets me leave him anywhere and then suddenly I’m invited to dinner with the kids, bring them over, get him used to Charlotte’s house and then the next time I can leave him. I leave preschool that day, my kids and I have dinner plans on Thursday, the zoo on Friday and now I’m dating the preschool parents.

As I head to my car, obviously giving off ‘the vibe,’ I’m approached by the perky mom with “angel” written in sparkles on her t-shirt. I wave her off. I’m already seeing somebody, I feel like saying, in fact, three people, seven if you count spouses and kids.

Our first date is Thursday, Charlotte’s for dinner. I pack Nathan and two-year old Emma in the car and go the ten blocks to their house on the hill. Their house is very clean, toys put away, the pictures on the walls in an organized fashion, the couches aren’t covered with dogs or stains, there’s no chaos here.

Lily greets me at the door, and then we’re crowded into the doorway, the kids so happy they’re silent, staring at each other. Niles is putting on kiddie music, the very kind I abhor the most, the Children of the Corn rendering of old favorites like “Itsy Bitsy Spider”, and Lily doesn’t give us any tour, in fact, she sort of blocks off the way to the rest of the house, so my kids and I divert our family river into the square of living room and pull out one box of trains and suddenly there is every toy, the house is a mess and they bring me a cup of tea which I’d really like to have and I set it to cool and of course never drink it, like with my own tea every morning. I find it at lunchtime, marooned next to the sink, oooohhhh, tea, that would have been nice. Then it’s lunchtime and naptime and everyone’s cranky and then after nap as the sun is going away I start to feel like a failure, I’m not doing enough, I’m only doing laundry, cooking, breaking up fights, ushering dogs in and out, getting water for people.

We’re in Charlotte and eighteen-month-old Audrey’s room, which is really a strip of carpet between a bed and a crib and an avalanche of toys, stuffed into every crack and under beds and shelves and the kids must play with every SINGLE one of the toys, especially toys that require a ladder to reach at the very tippy toppest of shelves, especially the imported toys from England which we find out later got lost. Then it’s dinner time and Lily relinquishes all control of the kitchen to me, to make my own plates from the steaming food, and I don’t know her or her kitchen well enough to feel comfortable – it’s like we haven’t even gotten to first base and she’s already walking around in a robe, disappointed, expecting me to get my own juice – that’s intimate, man, going in someone’s fridge. I don’t know her maiden name, and I’m already handling her hot spaghetti, RIGHT ON THE STOVE in front of her.

Dinner consists of all of us cramming around a circular table. The kids eat about a thimble of spaghetti, the baby flips her juice with no lid so it splatters spectacularly in a star pattern on the floor. Niles gets up to clean it up while Lily tells him I don’t know why you gave her a cup with no lid, then Audrey HURLS the cup so it goes whizzing fractions by my brain. My kids are delighted. They all run into the other room, Lily chases after the loose baby, and Niles and I sit and eat everyone plates until there’s no food left on the table. I can’t talk. I feel insanely happy. It’s washing over me, this relief that their life is as completely in the toilet socially as mine is.

Lily comes back in, sits for a minute, shovels two forkfuls in, leaps up, zips out of the room as the baby scales the bookshelf. Their life is a mess, I think, happily. At my house, where I reenact this exact scene, every night, I’m mad. At their house, the chaos is beautiful. Hilarious. A ballet. Niles and Lily and I maybe get three minutes of really meaty conversation in. But our eyes are full with the knowledge. We are the same. We’ve swallowed our personal goals. We’re sick with the indigestion of shattered hopes. We’re swamped with kids, and their infinite freight trains of needs. Our eyes have a similar lost haze, an echo of who we once were until kids destroyed us.  We’re perfect for each other.

The next day at the zoo with Scott, this is my tougher date. I’m on my best behavior. This is THE friend, the one Nathan must have. I’m not as in sync with Scott, and the similarity to the old boyfriend, the one I ultimately left because, well, I HATED HIM, it’s starting to bug me. We follow the kids into the aviary, where they run through, fascinated with the million sets of double wire doors, to keep birds from escaping. It’s like separate decompressions chambers, and impossible to get double strollers through. I eventually abandon my stroller altogether and lose myself in the maze, and after asking Scott every question about himself that I can think to ask to keep him busy talking, I wonder if maybe we’re even going to see ONE bird, the aviary is apparently UNBURDENED with birds.

It turns out Scott is a marine biologist (while in actuality resembling a bouncer or pro wrestler) disillusioned with the corporate world of research and gave it all up to raise the kids while his wife works as a t.v. executive. We see lizards and sea lions. There are snacks. Michael and Nathan are dislocated into the whole experience, blissfully intimate. I’m trying hard and four hours later we’re heading to the exit gates and I’m still not feeling it with Scott.  I mean, it’s all done with WORDS, we talk about the bedtimes, the diapers, the speed of childhood sprinting by… but I’m working hard to manufacture the feeling underneath, just like I did with my ex Thomas all those years ago, where I was pretty much dating my version of Thomas, when the real Thomas was just a guy who never talked, who lacked a longing, a depth of soul. We were only 18. But wait a minute. We’re not REALLY dating.

We reach the parking lot and I panic. Oh no! Did he have a good time? Are we going to see him again? Will Nathan get to go to his house? (The ultimate score.) Scott says, “We’ll have to do this again” and I inwardly pop the cork, I scored the second date. Nathan would not die alone with no friends.

We plan another day to go the snow, and Scott looks thrilled. I realize I never see the man with his hands free, he’s always holding the baby. Maybe I underestimate his ability to use gestures, maybe I should give him the tiniest break

We say goodbye, head to our separate cars. I think about the boys running around together at the zoo. How they bared themselves easily, without thought. How excruciating it is to be vulnerable as an adult – I’m out of practice and awkward at being open — my own heart has rusted shut when it comes to new friends. Who could pick that lock?

I try not to fold the baby up in the stroller as Nathan uses my keys to simultaneously open and scratch up the hatchback. He sees Michael’s car going by and reacts like an Italian seeing the Popemobile. He screeches “BEEP BEEP!” Scott beeps. Nathan blossoms. Baby Emma licks the window in gratitude.

Nathan looks excitedly at me, handing me the keys.