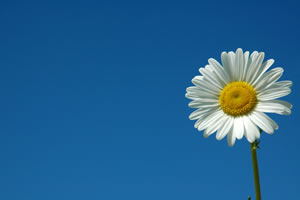 “But Mom, everyone’s doing it!” says my youngest.

Five years old and already she’s a sucker for peer pressure. I start to think of all the awful things that will happen to her in the future because of this… tongue piercings, multiple tattoos, getting drunk on Spring Break and starring in a "Girls Gone Wild" video. Today it all begins—the downward spiral… starting with Daisy Scouts.

For those of you not privy to the inner workings of Girl Scouts, Daisy Scouts are the youngest Girl Scout members. They are kindergarteners that wear blue tunics and earn iron-on Daisy Petals for learning each of the ten Girl Scout Laws. They use the petals to build a daisy on their tunic, around the circular blue daisy center patch they’ve earned for learning the Girl Scout Promise.

I swore I would NEVER have anything to do with Girl Scouts ever again. My oldest daughter had no interest in Scouting. She’s generally the type to do her own thing—like choosing to do rock climbing at the Y instead of soccer. But my youngest is a social butterfly, the one who wanted to be a Barbie cheerleader for Halloween.

I attend the Daisy Scouts Introductory Parents Meeting which drones on for an hour before turning hard-core. “We cannot leave this room tonight until we have our Daisy leaders. Who would like to be a Daisy leader?” threatens the imposing matron in the polyester green skirt.

No one raises their hand.

“It’s really easy. It won’t take up much of your time.” Liar.

No buyers. Three women who brought infants along either jiggle them awake to start them screaming, leave to change a dry diaper, or whip out a boob to start breastfeeding, signaling that they clearly do not have time to be a leader. The others who thought they were smart to leave their infants and unmanageable toddlers at home begin to realize their mistake.

One woman says, “I just can’t. I work full-time and I have three kids.” Green polyester skirt lady goes for the jugular. “Jennifer Smith has three kids and she manages a whole section of the nuclear power plant. She’s been a leader for three years now.”

One woman volunteers her friend who wasn’t able to attend tonight’s meeting.

It’s not enough. One leader is needed for every five girls — we need four for our town’s troop of 18. The lone dad of the bunch steps forward, juggling his fifteen-month-old twin daughters. “I’ll do it,” he says. I know him, his wife and his five daughters. He was an Eagle Scout and they’re done having kids. This is as close as it’ll get for him to fulfill his dream of being a Boy Scout Leader. He is obviously desperate.

Guilt starts oozing through the room. Another woman raises her hand and says she’ll volunteer, "even though," she adds, "I’m a mother of four."

The ante’s been upped. Then I realize everyone is looking at me.

We live in a small town. These women know me. They know I am a mother of two, who doesn’t work outside the home, who doesn’t manage a nuclear facility, whose youngest went off to full-time kindergarten this year.

My hand shoots up, and I have become my worst nightmare.

I attend countless meetings, learn how to fill out dozens of forms, and memorize all sorts of safety rules. We need to know CPR and must have enough booster seats for all children we transport.

Long gone are the days when my mom threw fifteen kids in a station wagon and drove them to our house where she forced them to do art projects that usually involved spray paint, melting candle wax, and inadequate ventilation.

Our head leader, the one volunteered by her friend, turns out to be an upbeat and energetic woman whose life was transformed by a mentoring Girl Scout leader. And her enthusiasm is infectious, her devotion to scouting sincere.

So I re-learn the Promise and the Girl Scout Laws. I buy a Daisy tunic, the leggings and the t-shirt for my daughter. I buy myself a leader shirt.

I become a voracious reader of anything and everything about Daisy Scouts. I study scouting philosophy. I immerse myself in the traditions.

I somehow become a born-again Girl Scout. I am fully enthralled with the idea of helping girls build courage, confidence and character. I am a woman on a mission.

Our first meeting is a rousing success. The parents and girls are completely thrilled…except for one, who tells me in a small voice in the car on the way home, “Mommy, I don’t think I want to do this.”