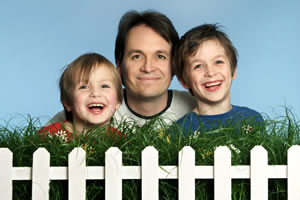 It’s amazing how two men can have a different outlook on their children. My ex-partner fathered two amazing boys. My current partner has been their dad for the last 7 years.

I have two boys — Kasey is 9 and Michael is 11. The arrangement has always been that they have the option to go to their father’s house or stay with me. It started out 8 years ago that they would go twice through the week and every other weekend. At first their father was living with his mother. The boys enjoyed spending time with Grandma. Kasey really missed not having his father around, and always wanted to spend time with him. Michael preferred to stay home. They have always had the option to stay or go.

Then the boys started to spend less and less time with him. He was never around, out drinking with his friends and wouldn’t call them back for a few days. Kasey was devastated and would cry himself to sleep waiting for his father to call him back. He was only two years old and missed him father. He was Daddy’s boy.

In the meantime, the boys lived with me. I didn’t let the boys meet my current boyfriend until I was certain that we would potentially have a stable relationship. And once I did, he would spend whatever time he could with us around his shifts. The boys already knew him, so they were comfortable. He started to stay over more often. After we had been together for a year, we bought a house and moved in together. That was Michael’s first year at school.

At this point they spent very little time with their father. He then met another girl with two children. She had a boy who is a year older than Michael and a girl who is a couple of years younger than Kasey. The boys resented sharing the little time that they spent with their father with these two other children and would ask to come home early. Their father resented that and would not call them for some time (I thought to get even). They just wanted him to want to spend time with him.

Because of their father’s unpredictability with alcohol, he was and is not allowed to drink while he has the children. If he was going to be drinking, the children needed to come home. There were many times that he would either not pick them up or needed to have them picked up.

He still uses a lot of guilt, which makes Michael feel bad. Kasey, however, doesn’t allow it to bother him. He is pretty defiant so it usually doesn’t phase him. Kasey’s only focus is meeting his own needs.

When Michael was in kindergarten, he used to draw pictures of his family, which included Michael, Kasey, Mom and Sheldon. He all of a sudden started drawing pictures of Michael, Kasey, Mom and Dad. He came home from school one day with one of his paintings and said that he started naming his step-dad “Dad” because he was tired of explaining who Sheldon was to his friends.

In all the years that Michael and Kasey have gone to school, their father has met one teacher. That was the year that his stepchildren were attending the same school as his children. He has never been involved in their school or activities.

For the last 4 years, the boys have played soccer. Their father’s brother would see what team the boys were playing on during their tournament and look up the schedule in the newspaper and show up for their games. Their father very seldom came to watch any regular games, let alone their tournaments.

Last summer, there was period where their father hadn’t called them or seen them in 6 weeks. When he finally did contact them, he asked them if THEY forgot where he lived. I reminded him that they were only 8 and 10.

This year was funny. The boys were heading to a meet early April. Their father asked where and when, and he was given the details. The boys and I had a chat about the possibility that he would not be coming (which happened most of the time). They had another meet in June and he asked the boys to let him know when and where. The boys never said anything to me, nor did their father call and ask me. When I asked Michael about it, his response was that he forgot, but that it didn’t matter – he wouldn’t have come anyway like he hasn’t over the last 2 years.

Something he said to me once, “What’s the point in going to anything? You will be there anyway.” He’s right, they are my children and I will always be there. If he truly wanted to be part of their lives, he could sacrifice seeing me and sit on the other side of the room.

Luckily, they have a wonderful dad who is there for them and has been for the last 7 years. They know they can count on him whenever they need him. When he’s not working, he is there for every one of their activities. He takes them to practices, games, meets, attends school functions and meets their teachers.

It really shows that anyone can be a father, but it takes someone special to be a DAD!