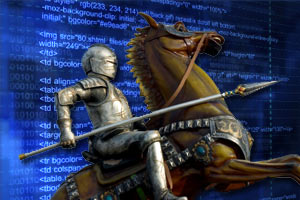 Like watching a presentation of what goes on in a slaughterhouse while eating a steak dinner, sometimes it’s better to live in ignorant bliss. After all, if we spent our entire day dwelling on all the cruelty and injustice in the world, most of us would wind up in the fetal position under the covers and not get anything done. There are those that take it to extremes, and never watch the news for this very reason. “Too much death, sadness and destruction,” they say, “I’d rather not know.” Same goes for the dangers that face our children – sometimes you just want to play at the park, or snuggle and read a book, and not dwell on potential evil awaiting them such as online predators.

But in the interest of child safety it’s our duty to be aware. This new breed of predator has taken away the idea of our home as a safe haven as they infiltrate through the bandwidth coming in from the wall. A child can longer be carefree. A parent cannot rest or be taken off guard. As soon as children are old enough, they must learn that there are people out there that are ready to prey on them as if they were animals in the wild. It’s certainly enough to make your heart ache and your stomach twist with worry. But it also makes us angry. These perverted minds don’t have the right to take away our children’s innocence. They don’t have a right to ruin children’s lives they’ve never even met. These pedophiles have no remorse, no compassion, and only a collective grassroots effort will help shut them down once and for all.

Fortunately for us, there is a vigilant group of extraordinary individuals who offer up an enormous amount of their time and resources to save children from the dark shadows of fear and pain before it ever happens to them. They are superheroes, flying through cyberspace, each with their own unique strength. They are not afraid of these pedophiles; in fact, they look them straight in the eye and say, “Bring it on!”

They’ve been dubbed the “Antis”, as in anti-pedophilia/anti-pedophile. The cowardly online predators have perhaps finally met their match — the Antis have law enforcement and a large host of volunteers on their side, as well as knowledge and resources. The Antis resolve is determined and unfaltering. They work day and night to destroy the child molester’s ability to prey on children and shut down their support networks, and they will not rest until every pedophile becomes the hunted instead of the hunter. So far, they have been wildly successful. The folks behind blogs and websites like ACME Cleaning Services and Absolute Zero have contributed to shutting down hundreds of pedophile blogs, websites, social groups and support forums.

While some forms of pedophile propaganda are protected by the First Amendment, that does not always apply when the websites promote criminal behavior or conspiring to hurt, violate, rape and molest children. Also, since the blogs and websites are on private hosting services, they are subject to the host’s “terms of service” (TOS) usage policies which prohibit certain behaviors.

Some of the more popular sites, such as Perverted Justice, have thousands of members. Perverted Justice is best known for its partnership with Dateline NBC’s To Catch a Predator with Chris Hansen. Perverted Justice has long been part of sting operations in which no children are ever involved. Instead, adults, acting as children, set up profiles and wait for predators to solicit them. Perverted Justice has also recently launched the “Wikisposure Project”. Using the wiki format ala Wikipedia, Wikiposure has categories which include state sex offenders with their rap sheets and full profiles included. Unlike Wikipedia, however, edits are controlled by a select group of people instead of being open to the public, for obvious reasons.

Absolute Zero takes a similar route — contributors write exposés on pedophiles and pedophile websites. Run by some of the bravest volunteers on the planet, their comments section is full of pedophiles putting forth a lot of effort to protest the Antis’ work, with pathetic results for their efforts. After spending little time on the blog, it is clear that the predators are feeling the effects of the tables being turned. To use the old cliché, the hunters have now become the hunted. Absolute Zero has been accused of conducting a "witch hunt", but this dedicated group remains undaunted.

When asked about support and obstacles in the war on internet pedophile terrorism, "Rez" from ACME Cleaning services says, “Anyone who supports what we do is helping and aiding us. Lazy, incompetent people who won’t remove pedo[phile] filth are occasionally a hindrance. But we’ve been able to convince a lot of them that it’s better to be on the side of right. We’re still working on the others.”

We asked "Jacey" what made him interested in hunting down predators and pedophiles on the internet.

“I know victims of sexual abuse, when you’re close to someone who’s been abused you’re also living with the after effects sexual abuse," Jacey says. "When you’ve seen what it does to someone, you develop a pretty big feeling of hurt/anger/pain against people who spend their time trying to legalize this shit – sleazoids that treat the violation of someone else body as nothing more than a joke or an obstacle that stands in their way.”

Many other Antis have also come into the fight after being victims of abuse themselves. One such person is "Violet Leaves", who says, “I am a survivor of childhood sexual abuse. I want to stop these monsters from hurting another child.  I also have daughters of my own.”

The fight is definitely personal for her — she spends over 40 hours a week on the cause, with her purpose being, “to make people aware of the dangers of pedophiles, exposing pedophile lies, and propaganda.”

The Antis movement is not without criticism. Some look down on what they consider vigilante methods, harassment, entrapment, and violations of free speech. Perhaps Sues, who also puts in full-time hours towards the Anti cause, meets this objection with sobering clarity when she says, “Free speech does not mean free to do harm. Plastering pictures of children on the internet for other pedophiles to use for pleasure is harmful. Encouraging adult-child sex is harmful. Offering ways to keep from being caught by parents and law enforcement, while gaining access to children is harmful. Talking about how sexy a toddler is in diapers is not only harmful, but disgusting as well.

"These are just some of the things that pedophiles do. They claim that web hosting companies deny their right to free speech to talk about raping children. That statement alone shows how wrong they are."

Sues, referring to her child advocacy work and her website, "Warriors For Innocence was started by my brother and me. We branched out and wanted to create a place that was family friendly in the midst of a nasty subject. Educating the public on how these predators work is so important. It is a large part of what I do. If everyone knew how these monsters operated, there would be a lot less victims out there.

"During my time online I have seen some horrific images of child abuse and rape. It has changed me and driven me to continue hunting the monsters that prey on our children. Those images are forever burned into my mind. It is because of that abuse that I fight the evil that is the predator.

"My reason for doing this is simple and I state it every time in my signature: ‘I hunt and fight monsters. If I can help to get even one monster off of the street and away from kids, then it was worth any amount of effort.’"

Many of the Antis are also contributors to Absolute Zero, which acts as a main hub of information about pedophiles and exposes their communications and multiple identities. Comments are allowed from both Antis and pedophiles, which creates a unique and sometimes compelling environment. Many pedophiles post under the guise of wanting to help or of being an Anti themselves — this ruse rarely lasts very long, however, as the Absolute Zero contributors and followers are astute and expose them before they have a chance to be taken seriously. The site owner, "Stitches", is a master of cyber-detective work, putting pedophiles on notice and educating the public while briefing her legion of dedicated writers and volunteers.

These sites are not for the faint of heart — they are full of truth and facts that most parents would rather not know. It is stuff that nightmares are made out of, yet this group of very special people are not afraid. They’ve made a pledge to fight for the "safety and emotional well-being of all children" and will not rest until the war is won. The world is a safer place due to these extraordinary individuals, and as parents we should be grateful for the work they do and hopefully have a new appreciation for great deeds that never get the full attention they deserve.

Leave a comment on this article or any in the series