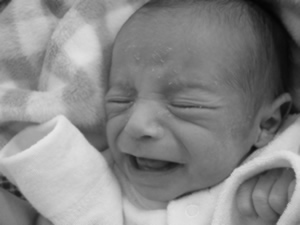 He was here. We had been waiting for 42 weeks. His due date had come and gone and still we had waited. He did not want to come out, did not want to meet us. It was cozy in there, squashed inside of me. Finally, fourteen days after he was supposed to arrive, he had a forced eviction. The pitossin was plugged in, the earth moved and eight hours later, Daniel arrived. Loudly.

Daniel screamed in the delivery room. He screamed in the recovery room. He screamed in the nursery as all the other babies slept. He screamed when he was brought to me and screamed until he settled, finally, with great gulps at my swollen breasts. The next day we took him home in a little blue sweater and a hat that wouldn’t stay on. He fell asleep on the way, a tiny creature lost in the behemoth car seat. My husband went to park as I carefully carried Daniel upstairs to our apartment, his new home. I propped the car seat on our bed and gazed at him in wonder, waiting for my husband to return, waiting for our new life to begin, thinking, “so this is it – what do I do now?”

And then he woke up.

They say it takes a baby two weeks to really awake after the trauma of birth. Daniel spent those two sleepy weeks inside of me. As soon as he arrived, he was awake, he was alert and he was unhappy. He wanted out, he wanted back in, he wanted the sounds and smells and watery warmth of my womb. He was pissed to be here. He’d raise his head (yes, on the very first day) and glare at me, then open his cupid bow lips and bellow. Never, ever, for a second, did he lie back and enjoy all the perks of being a baby. No googly-goo time of just hanging out, looking around, watching the shadows, the sunshine, the light. He was crying. Or nursing. Or crying and nursing. And so was I.

Daniel needed to be held, he needed to be moving. He needed to be swung, hard, way up in the air. He needed to be marched or bounced or bobbled. I couldn’t wear him in the baby carrier because he would want to nurse. He wanted to nurse always, forever. He hated the carriage, hated the car seat, and hated his Kanga-Rocka-Roo. I’d see other mothers, those lucky mothers, their babies blissfully sleeping in their strollers as they ambled through the park, shopped in Gristedes, lingered at Starbucks over a cup of something steaming. I’d look at those babies and I’d marvel at them and hate them and envy them and wonder why my son seemed such a different species. Daniel didn’t sleep. He cried and cried and screamed and screamed and he did not sleep.

This was not how it was supposed to be.

We came up with ways to try and stop the crying. First, we called the doctor. One pediatrician, kind and patient and patronizing, assured us everything was fine, she got this type of call every day, all day long, from new mothers anxious about their fussy firstborn.

“But he’s not sleeping,” I wept. “He cries and cries and doesn’t sleep.”

Colic. Yes, colic. But colic was supposed to be only at night, only for a few hours. This was all day, every day. For weeks and weeks and weeks on end. Another doctor, on call for our pediatrician, recommended chamomile tea. But Daniel wouldn’t take a bottle, wouldn’t take a pacifier, wanted just me, my breasts, twenty-four hours a day. I boiled some tea, let it cool, then dropped some drops in his mouth like I was feeding a day old kitten. Daniel looked at me. His two-week-old eyes flashed accusingly. What are you crazy? This isn’t milk. You can’t fool me, you pathetic excuse for a mother, you. He spat out the tea and resumed his sobbing.

No. This was not how it was supposed to be.

We started hearing tales of babies who were allergic to their mother’s breast milk, babies who switched to formula and were fine. Was that the problem? His little tummy rumbled, I could hear it. And as I nursed, the rumbling got stronger. Was I the one who was making him gassy? Was I the one causing him pain? A lactation specialist suggested in a phone consultation that my diet might be affecting my oh-so-sensitive boy. I had already cut out garlic and spices and now I was told no more dairy products, no more peanut butter, no more citrus. I lived on waffles and toast and water.

Along the way we made some discoveries. MTV, or VHI, if it was blaring, was a distraction. We swung him in the Kanga-Rocka-Roo (not rocked him, swung him, hard and high, my triceps glistening as they gained definition) and we learned the lyrics of every top 40 hit that sweltering summer. Vacuuming would shut him up for a moment or two. And so would the sound of water. We put his bassinette in the bathroom and followed a three-step protocol: he had to be swaddled, the water had to be on and he had to be pushed back and forth. (Not rocked in the bassinette, PUSHED HARD, BACK AND FORTH, with a definite rhythm. I would push and pull him, the words to a not-quite lullaby screaming in my head: “This is not, cha, cha, cha. This is not, cha, cha, cha. This is not how it’s supposed to be, cha, cha, cha.”) After hours and hours in the bathroom and the kitchen we finally realized we could just make tapes of the torrential gushing and wouldn’t have to actually waste all that water. We kept one tape in the baby’s room and one in the car. Every night Daniel would be rocked, pushed, hurled to sleep to the sound of water, water, everywhere, but not a drop to drink.

This baby was high maintenance.

And still the doctors said it wasn’t a problem, wasn’t anything out of the ordinary. They said he would grow out of it, he was progressing normally and they held the three-month mark up as some magic moment when all his screaming would stop. I didn’t believe them, I knew he would cry forever, but I marked the days and weeks on the calendar, waiting for the three months to pass, as I marched him up and down the hall in the nightgown I never changed out of, my unwashed hair hanging in my face, my tears sliding down my nose and splashing on his tiny, angry cheeks. I’m sorry, honey, I’d think, or maybe I said it out loud, or maybe I screamed it. I’m sorry I’m not a good enough mommy to make you happy.

Sometimes, as Daniel cried into the night, and my husband was off, acting in a play, I’d fantasize about leaving, just to get some quiet. I’d put out the garbage and wonder, what if I just walked away? What if I walked down the three flights of stairs, past the doorman, out onto the avenue and just kept going, going, going until I was gone? I’d test myself a little bit, to the elevator, or to the neighbor’s door, but then I’d hear his wail and I’d return, to hold him, to bounce him, to walk him, to nurse him, trying not to give into the impulse to hurl his little head against the bathtub’s edge. I think this is why they put bars on the windows of the apartment when you have a baby. Not to prevent the kid from falling out, but to prevent you from throwing him.

The crying did eventually stop. Or at least it tapered down. Not at three months, not at four, but somewhere around six months I guess Daniel grew resigned to the fact that this was it, he was here, this was the big old world and he better get used to it. One night, as I was putting him to sleep in his crib, I put on his lullaby tape, as always, and picked him up to give him a hug, as always. But this time, for the first time, he let me hold him, without struggling or crying or searching for my breast. I held him and he put his little head on my shoulder and he curled his little hand round one of my fingers. And we danced. I held my son and I cried and sang “Hush Little Baby” as he yawned and squeezed my finger tight.

That was ten years ago. Since then I’ve had another baby who didn’t scream all the time, a baby who was happy just to be held, happy to be with us out here in the land of the living. I’ve had many, many challenges, and so has Daniel as he’s grown and struggled to find his way. But I think of those early, endless days and nights when I stumbled blindly, trying to appease a very small human whom I had brought into this world against all his fervent wishes, a human who simply wasn’t yet ready to be. And who could blame him? Daniel has discovered some good things in this world: vanilla ice cream, video games, riding the waves at Cape Cod, but there are times, I think, when he feels, still, as if he would rather be somewhere else, somewhere other than this big old noisy, crowded planet; somewhere quiet and cozy and warm and snug. At night Daniel pulls his covers round himself tightly and piles pillows on his head. He turns off the lights, except for the one in his closet that wards off the demons. Wrapped in the silence and the cool, cool darkness, with the cacophony of city traffic gliding past his window, Daniel sleeps.