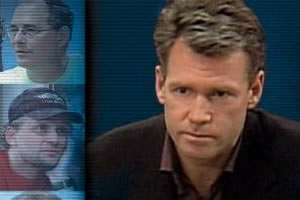 Chris Hansen is the correspondent for the Dateline NBC show, To Catch a Predator, which has become so popular it’s even spawned a number of parodies.  Now the author of a book on internet safety by the same name, he’s become the famous face of the fight against online child predators. Hansen recently spoke with The Imperfect Parent about his motivation, the impact of his series and book, and which episode really gave him the willies.

Imperfect Parent: You’ve done extensive investigations into issues like Cambodia’s child sex industry, as well as the To Catch a Predator series and book. Was there anything that first sparked your interest in child advocacy?

Chris Hansen: Having two sons, I approach every story not only as a journalist, but also as a parent. I learned a long time ago that the only way to help exploited children is to expose that exploitation. Sometimes the things we uncover are difficult to watch, but once you see the things some people are will to do to children, it’s difficult to turn away. Several years ago I did a story on child slave-labor in the Indian silk industry. I went to a bridge school  where kids go after they have been rescued from forced labor. I remember the looks on the kid’s faces and how happy they were to have an adult pay attention to them in a positive way. It’s something I’ll never forget.

IP: On shows like "Cops", they can only show people’s faces that have signed a release — it’s hard to imagine anyone on your series would sign one. Has anyone tried to legally block NBC from airing their segment?

CH: There have been a few attempts to block someone from being shown in one of our investigations. None of them have succeeded. Basically because we are a news program, we don’t have to get consent. There is a little more nuance to it than that and the laws differ from state to state, but  we are covering a story and we don’t need to get permission from the people who are in it.

IP: Of the many predators on the show that don’t recognize you and are genuinely surprised when the camera crew comes out, who do they initially think you are?

CH: I think they sometimes think I am with law enforcement or the unexpected parent who has just got home.

IP: What is the most disturbing thing you’ve witnessed during production of "To Catch a Predator"?

CH: There have been many, but one that sticks out in my mind is the man in Ft. Myers, Florida who came to our hidden camera house to have a liaison with someone he thought was a 14-year old boy. The man actually brought his 5-year old son with him.

IP: Has Perverted Justice ever encountered any women online seducing children? Have any shown up to the "decoy house"?

CH: Only a couple of times have we even seen someone claiming to be a woman online trying to seduce a child. We’ve never had a woman actually show up in one of our investigations.

IP: What would you say is the key message of your book?

CH: I had amassed a lot of critical information from these investigations that we just didn’t have to explore on the show. That’s why I wanted write the book. I had looked into the eyes of more than 200 potential predators, read their chat logs, talked to some of the smartest people in child advocacy, law enforcement, psychiatry, the wives of predators and even parents who thought they were doing everything right and still had their child victimized. I wanted to distill that information in a meaningful way for parents. I also wanted to initiate an important discussion about treatment and punishment which our society needs to have.

IP: In the book, you quote some alarming statistics about the enormous increase of online predators since the year 2000. Do you feel your efforts have helped to reduce those numbers?

CH: I think we have raised awareness and initiated a discussion which did not exist before and it has helped parents to have an open dialogue with their children about online safety.

IP: Some experts in your book make the case for treatment instead of straight jail time for child predators — how would you answer parents criticism that treatment and freedom is a reward for those who victimize children?

CH: I don’t think every single offender qualifies for treatment. There is no one size fits all solution. Some offenders will respond to treatment. Some to a combination of treatment and punishment. The problem is that we want easy answers, a single treatment program that works every time. Some offenders need treatment for the rest of their lives. One thing has become very clear to me and that is there are not enough treatment options for sexual predators. There are men out there right now who have not acted out, but are considering it. They know they have a problem and don’t know where to go for help.

IP: What do your sons think about your work?

CH: My sons, like most young teens never realized these kinds of people were prowling the internet until we started reporting on the topic. They enjoy hearing about the investigations while they are underway. But like most kids their age, they think their dad is a big pain when he preaches internet safety. I think most of it sinks in for them though.

IP: Why do you think "To Catch a Predator", both the TV show and book, has been so successful?

CH: I think it is both compelling television and the fact that a lot of people just never realized that this was going on in chat rooms and on social networking sites. That combined with the fact that most of these guys  look like they could be your neighbor. They don’t have the word "predator" tattooed to their foreheads. We’ve had doctors, law enforcement officers, teachers, businessmen and even a rabbi surface in our investigations.

IP: Do you think the parents of a predator’s victims have any culpability for not monitoring their child’s internet usage more closely?

CH: I think  a child’s best defense on the Internet is what happens at home. You have to have an open, honest conversation with your kids about adults trying to talk to them online. Children need to know that if they are approached in an inappropriate way they can come to you as their parent and tell you what happened without worrying that you’ll take away the computer. And by the way there is nothing wrong about limiting the number of hours you child is online every day.

IP: In that same regard, many of the predators you confront admit to having wives and families. How do they hide such activities from them, or is it just a matter of ignorance and/or turning a blind eye?

CH: Well, I think some of the predator’s wives and families may be suspicious, but the Internet allows people to be anonymous, have access at any time of the day or night to chat rooms and computers are very portable. This allows men to conceal their activity from their families.

IP: In the book you state it is important not to use the computer as a form of discipline or to take it away if a parent suspects suspicious behavior. What action do you recommend instead?

CH: Again, while the computer should not be used as a form of punishment in my opinion, if you limit the amount of time on it, your child will get down to the business of check movie schedules, instant message friends and downloading music. That less time loitering in places where the could be targeted by a predator.

IP: What are future plans for the show?

We just recently finished our 11th investigation, this time in New Jersey. It will air starting on July 23rd. After that we’ll take a look and things at decide if we’ll do another.

Leave a comment on this article or any in the series