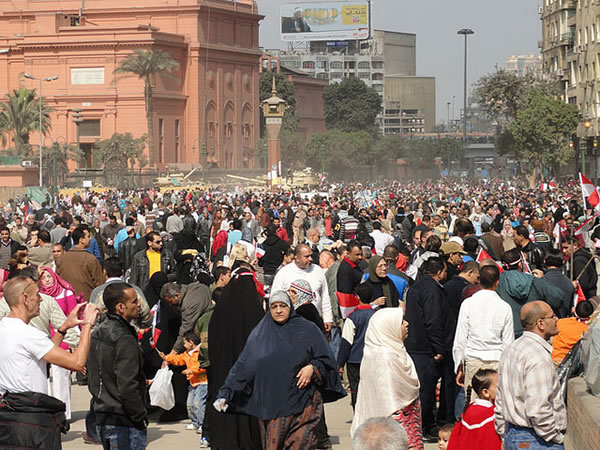 "Mommy! Don’t ‘oust’ me! I am not an evil president,” said my six year old as a reply to my Allez! Oust! Au lit! which is French for "C’mon and get to bed right away."

She associated the interjection "oust" with the English verb she heard so many times from me, as well as on television where attempts to "oust" Mubarak, the evil Egyptian president, was all over the news. She said that to me in English then switched to Arabic to ask me if I can take her to Tahrir Square tomorrow.

The way she pronounced "Tahrir" made it clear, beyond any doubt, that she was truly Egyptian. The way she formed the “h” of Tahrir, the letter we represent phonetically as "7" in our Arabic text messages, was impeccable.

“Tahrir means liberation in Arabic, is that why we choose this square mommy?”

It was, in fact, just a coincidence–a very befitting one indeed. Liberation Square witnessed the largest protests in Egyptian history. Protests which lead to putting an end to the thirty year reign of the dictator Hosni Mubarak and has set the country on a path for political reform.

Tuesday, January 25th, was the date it all started. My daughter woke up and sat next to me as I was watching a live feed showing the protests. I explained to her that people are demonstrating because they want the president to leave, as he is not a very fair person and he had done many things that are very wrong. She heard me talking on the phone to friends heading towards Tahrir and that was the first time she heard the word dictator–or a deektaatoor as we would pronounce it in Arabic. She giggled because a ‘toor’ is a bull in Arabic, so to her, that was a funny way to insult someone.

Her eyes sparkled and I did not want to burst her bubble. She spoke in Arabic except for the English word “bully.” She had made an interesting association between the word bully and ‘toor’ which in her mind meant bull. I though this quite amusing and wondered whether I should correct her at all.

“No honey, a ‘deektaatoor’ is called a dictator in English and has nothing to do with bulls. A dictator is someone who likes to hog power and authority all for himself, and he uses them to control people.”

This exchange was again in English, and then we went into a discussion, in French, of the differences between ruling a country and being Mayor of ‘Toy Village’–her own imaginary make-believe play land. She did not think there was that much of a difference and so she firmly believed she would be an excellent choice for the next Egyptian president, like Cleopatra. The fact that Cleopatra was not a president did not matter too much to her. A person who rules a country, whether elected or not, should be just and fair. You can hardly argue with that.

Our trilingual conversation is just an example of the multiculturalism that exists in Egypt. We have French, Canadian, British, and American family members in our extended family. In fact, almost every family in Egypt does. And they all have backed up and supported our revolution.

This time in history, all the children of Egypt, like my daughter, are learning important lessons about freedom, courage and standing up for their rights–values which were only whispers prior to January 25th, 2011.