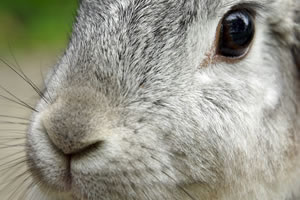 At first they looked like freaky mice. Their thin skin was taught and hairless, their eyelids full of red thread-like veins were stretched forever close. I reached out and brushed them timidly with my pointer finger, then recoiled. They were still warm from their mother’s womb. I looked at my pet rabbit Scamper, the new mother. Maybe I only imagined the sorrow in her wide, pink eyes. Dad told me we had to take her lifeless, premature bunnies out of her cage before she ate them. I looked at the huge holes she had chewed in her sleep box to keep her sharp yellow teeth from overtaking her with wild growth. I shuddered.

Although the experience buzzed around in my head for days until it stuck permanently to my mind, I didn’t write about it. Not because I wasn’t writing as a seven year old. I wrote all the time down in the dark storage room under the skewed light of a second-hand desk lamp with a broken neck. But I thought real genius had to stretch beyond my world’s drone. So for years most of my stories were combination romance/pioneer-trek.

Eventually I discovered a way to make a living at writing about things too exciting to ever happen to me—journalism. After college, I found myself covering murders, government scandal, drug busts, and sex abuse. I thought I was good. I was expecting big awards. Promotions.

Then one day I stepped out of my cubicle and into the cold March air one afternoon and never came back. This wasn’t intentional. I began hemorrhaging in a shopping mall. A little over an hour later my son Samuel was born—two months early. Sam was blue, his skin tight, his limbs thin, his eyes closed. He whimpered once, then quieted. The nurse put some kind of pump in his mouth to help him breathe and let me touch him before whisking him off to the NICU. I reached out and touched my tiny child, then recoiled.

I was standing next to my baby’s incubator when my boss dropped by for a visit. He thrust a tabloid in my hands that announced the results of a journalism contest I’d been waiting months for. I set the paper aside without even a glance. He told me about several awards I’d received. I didn’t respond. He asked if I would come back to work. Still, silence. My eyes were fixed on Sam. I couldn’t dream of caring about anything but him ever again. The rise and fall of his tiny ribs seemed enough.

So I didn’t go back to work. Unfortunately, it didn’t take too many sleepless nights and dirty diapers before the magic of watching him breathe faded. My life became shattered glass, not whole or smooth, or coherent, but an endless pattern of pieces. The urge to write surfaced from its remission. But finding time to do it seemed like reaching my hand back through the broken window of my life into what was behind me. Ouch!

The first time I typed again, the words on the screen seemed thin, vein-like. I changed the font to something chunky, more friendly. But when I finally started clicking away, Sam screamed. I took a deep breath, fed him, then sat down again.  The phone rang. After I hung it up, I turned toward the computer the same instant I smelled smoke from the kitchen. I forgot I put soup on. Sam started crying again.

As I sat giving Sam his dessert, I wondered how it would have been if he’d never happened. I saw myself in New York typing in the office of one of the magazines I can now only afford to read at the library. I was wearing a white suit and wasn’t the least bit worried about it getting spit-up on the collar. My breasts weren’t lop-sided from a baby who prefers to nurse on the right.

Oh, well, I told myself. You can still be a great writer. Just put your projects aside projects for a few months until Sam’s older. Until then, you can always write in your journal.

So I picked up my large leather diary as soon as Sam went down for a nap, but the words that came out of my pen were second grade. I was sad. It was hard. He is growing. When I read them later, I was frustrated. There was no color in them. No softness. No stuffing. When I had written about things that hadn’t happened to me, the words had tumbled out of my mind full of flavor and variety. Clunk. Clunk. Clunk. Easy as twisting the release on a candy machine.

Eventually Sam became old enough to feed himself, and I decided to try my luck at the computer again. Sam was dumped with his lunch in front of Baby Einstein on repeat play. I watched eagerly until his head began to bob to the music. Success! I crossed the room on tip-toe and turned on the computer.

“Yaaah-o-bah!” he yelled back me and kept hitting the keys. So I turned off the computer and closed my eyes, searching for patience. When I opened them I found Sam wiping his peanut butter sandwich across the TV screen.

This time I yelled at God, not Sam. I wasn’t ready for this! I had things to say! I wasn’t finished!

Later that night, I spent more time clearing out Sam’s typos from my work than I did putting down more of my ideas. But after sifting through every line, I found something there. It was simple, just a start, but it gleamed, perhaps rubbed clean of some pre-parenthood film. Maybe I hadn’t lost my touch, I thought. Maybe all this mothering mayhem will just turn out to be inspiration for better writing.

But when I picked up my creation—still wet with ink from the printer—its warmth flickered and died. The page went cold in my hand. The words seemed lifeless when I re-read them. Something I had given birth to too early? Perhaps my words were doomed like my womb.

It may have been tears, but the words blurred and jumbled on the page the longer I looked at them until they ceased to be words—just clumps of light and dark like little holes chewed in the paper. And for the first time, I saw my writing for what it is. Not that I won’t keep trying—maybe even harder than ever—because I know the most important result is that my attempts will keep me from chewing holes in my own mind. But writing isn’t my life. At least not anymore.

I set my paper down and stepped into Sam’s room. I pressed my hand to his warm sleeping face. His hair looked like someone just rubbed the top of his head with a balloon. He smelled like toast. I stared at him a long time until his features blended and bled together under my gaze and ceased to be features. I returned to the computer and sat down to start a new piece. This time I started with something that has actually happened to me instead of dreaming of things that haven’t.