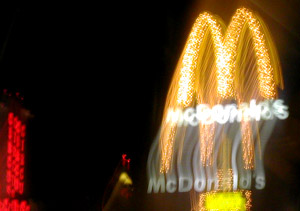 The two pound nappy was dripping with anticipation. I’d been left at home to mind my fourteen-month old son Ronan who was a real handful. My wife had to go and see a relative who lived four hours away. My mum and my mother-in-law were unavailable to monitor me, so this was going to be my acid test. Me and the kid. I was fine when I had the careful tutorials of the "Big Three", but this would either make me or break me. My wife Tania had left a note with all the instructions typed out, but it read like a disclaimer. The first thing I did was chuck out the note. I didn’t need any high tech gadgets to get through this; all I needed was a bit of cunning and some bribes in case he got out of control.

The first point of order was to change the nappy. Easier said than done. Ronan was like a Greco Roman wrestler when trying to change his nappy. He was harder to pin than a heavyweight. The first bribe I issued was a bottle of milk and a Wiggles DVD which worked perfectly. I not only changed the nappy but put on some clothes. I was so proud of myself that I stood him up to check out how well I’d done, when I noticed I’d put both legs in the left leg hole. Some minor adjustments and I started with breakfast.

I made Ronan some porridge just the way I had seen mummy make it but he didn’t want to eat any. He always ate for Tania. I did aeroplanes coming in from all angles but nothing seemed to work. After twenty minutes of  trying, I did what any other father would do and took him to McDonald’s. Ronan gorged on pancakes and had room for a hash brown. If only it was for free. I let him have a bit of a play in the "Playland" while I sipped my coffee, feeling pretty pleased with myself. Waaaaaaaaa! Ronan started bawling his eyes out up in one of the slides. I took off my shoes and waded in crawling around on all fours. I nearly got wedged in one of the tight turns myself. Who would have rescued me? When I located Ronan it turned out that some little kid was blocking his way. He wanted a toll for us to go through. I told the kid in no uncertain terms to take a hike. Ronan was still crying when my mobile phone rang.

"Why is Ronan crying?" asked Tania.

"How stupid do you think I am?"

"Give me a break, will ya? He just ate a hearty breakfast."

"You had better not take him there for lunch, too!"

"I’m getting a bad reception in this maze… I can’t pick up a signal! See ya."

I hung up and got the hell out of there. I felt like my wife was somehow watching my every move.

The next stop was the park for some quality time on the swings. We got into the car and I put on a Coldplay disc. I started to sing along with it when Ronan booed and jeered from his back seat. Was I that bad or was it Coldplay? I reached for an ever present Wiggles disc and as soon as he heard the music he was happy, even singing at one point. When was I going to get to listen to some of my music again? When we arrived at the park Ronan’s face lit up. He knew this place, all right. He was playing well by himself when his attention was taken by the little slippery dip that had been previously occupied. He started to run, but as he did so did another kid. They were headed for a collision course coming from different angles. Ronan was just pipped at the post and there was nothing I could do for him. He had to learn that you can’t always get your way. He didn’t accept this defeat very well. I couldn’t placate him. I tried the other swings and climbs but he was too upset. The mobile phone rang again and to my utter surprise it was my charming wife again.

" This is a separate incident, thank you very much."

" I’m gonna be another couple of hours. AND DON’T TAKE HIM TO MCDONALD’S FOR LUNCH!" shouted Tania in a harsh voice.

" I would let you say hello but he might get even more upset and want you to give him a cuddle. See ya."

I drove him around for an hour until he fell asleep. As we neared the McDonald’s car park I gently parked the car, locked the doors, let some air in and joined Ronan in catching up on some well-earned rest. I was ecstatic when he finally arose after a two hour nap. We went through the drive through and headed for our last port of call — Toys ‘R Us.

Ronan was so excited when he realized where we were he actually giggled out loud. We went inside and I let him loose. He’d been there only a handful of times, but he knew exactly where all his favourites were located. He eventually headed for the battery driven cars and hopped in. Ronan was like a rally car driver weaving around people and toys.

He had an accident after his tire clipped a piece of merchandising and he spun out. The staff came from everywhere and when they tried to get him out of the car, Ronan showed some of the worst road rage I’d ever seen. I gathered him up and quickly left the store.

Ronan was still crying when we arrived home to see, of course, Tania waiting in the driveway…