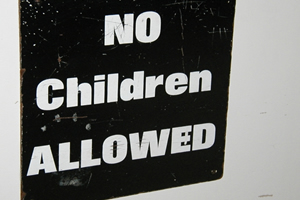 Childfree. A clever appellation for a group of people who are “childless by choice”, the term conjures up happy associations with words like “carefree” or “worry free”. On the surface (that is, in the carefully chosen words on the front pages of their websites), this childfree movement appears calm and rational, even reticent, in the face of the great discrimination they claim to face. On sites such as Childfree.net, you’ll find descriptions like: “We are a group of adults who all share at least one common desire: we do not wish to have children of our own…We consider ourselves childFREE — free of the loss of personal freedom, money, time and energy that having children requires… Most of us are almost afraid [of] the disapproving stares and cries of, ‘How can you not want children?!’…We feel like freaks.”

Well, if they feel like freaks, maybe it’s because they are freaks. Dig under the surface, flip over a log or two, and you’ll find a much darker picture. The following comments, from alt.support.childfree (on Google Groups), were all written just this week, and were taken from a single thread discussing noisy kids in restaurants:

“Unfortunately this is AZ where breeders [parents] rule and moos [mothers] get laws passed so they can whip out their tits in public.”

“You breed ’em, you control ’em… Someone had better keep the damned monsters quiet.”

“If breeders and their vermin were confronted more often for such shit, it might go a long way to stop it. But nobody wants to step up. …”

Lovely. Really sounds like a hate group, doesn’t it? (If you don’t see it, just substitute racial epithets for “moos”, “vermin”, etc.) And this just scratches the surface: when I made a foray into this forum to stick up for parents (essentially, to point out that not all of us should be tarred with the same brush), my young children were insulted in brutal and even sexual terms, and thinly disguised threats were made against their lives (to the point that I reported it to the FBI). To be fair, there are other posters on this forum who use a more moderate tone — but since they don’t confront the hatemongers, and continue to converse with them, they are culpable as well for implicitly supporting this toxic stew of hatred.

Moving past the unhinged child haters, even the more moderate “Cfers” suffer from a serious logic deficit. If their basic proposition were that there are many mediocre to bad parents whose kids, as a fairly direct result, are no picnic either — then yes, I’d have to agree with that. But that’s an argument for better parenting, not for the elimination of children from the planet, for god’s sake! The answer to bad parenting is to set an example with good parenting, not to carp from the sidelines.

Even more frustrating, this is largely a secular and liberal bunch (like yours truly). Yet they don’t seem very savvy as to how evolution works. They are filtering their DNA right out of the gene pool — and if, as we secular liberals tend to believe, there is no supernatural afterlife, the gene pool is all we’ve got. Since by definition all people have to start out as children, to dislike children and oppose “breeding” is essentially to oppose the continuation of the human race. Yet a lot of these folks seem to like other adults, as long as said adults are also childfree. Do they really not want another generation of adults to come into existence? Would they actually like to stop the entire human race from procreating, if that were possible? I’m just not sure they’ve thought this whole thing through properly.

One issue that childfree advocates have seized upon is that of the inequities of the tax system. There’s no question that parents pay less in taxes than non-parents, due to the federal per-child tax credit. This does essentially mean that childless workers subsidize the taxes of their “breeding” coworkers, because to eliminate the child tax credit in a revenue-neutral way would require lowering taxes for workers who don’t have kids. But this ignores the fact that someone is going to have to take care of these CFers when they are old and/or disabled. And since it obviously won’t be their kids, it’s going to have to be other people’s kids. So a little advance payment to help raise the generation that’s going to be changing their adult diapers someday doesn’t strike me as out of order!

I want to be clear: I’m not saying people shouldn’t have the choice to not procreate, or that making that choice means someone has less worth as a human being. But the people who join this “childfree” bandwagon are insufferable whiners at best. At worst… well, they represent something much more malign, as we may well see in the comments if any CFers catch wind of this column…