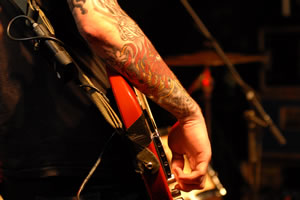 In our upstairs family room/loft, the band is tuning up. Justin picks out riffs on his guitar, twanging them over and over. Next, Ryan kicks in––thwunk-thwunking and snarling out a litany of complaints on bass, soon joined by Blake’s crashing of cymbals. Before long, Drew has launched into song, although I use the term loosely, for the aptly named Blood Trolls sounds more like a “thirteen-year-old girl being murdered,” as my eldest son says. Or, a “hamster lobotomized without anesthesia,” as my neighbor who lives several acres away says. For what Drew does more closely resembles shrieking than singing: each drum roll of Blake’s is punctuated by a high-pitched eek-eek-eek-eek from Drew. Although he does this with the volume set at eleven (on a scale of ten), his songs are mercifully short, as is the band’s set of four tunes.

The Blood Trolls are a foursome of my teen sons’ friends who needed a venue after being banned everywhere else in our small Central Coast California community. I found out why, after hearing songs like “F-U George Bush” and others whose lyrics, not to mention titles, were indecipherable. But whatever may have been lacking in intelligibility is more than compensated for by enthusiasm, for the Blood Trolls are nothing if not exuberant.

My late husband Chuck Greenberg, a Grammy Award-winning musician, would approve of the Blood Trolls as well. Chuck––no stranger to censorship––composed his first Shadowfax album for Windham Hill Records in 1981 on a baby grand in the living room of our Santa Monica apartment, prompting complaints from our landlord about “conducting a concert business against the rules of the rental agreement". As a result, I have a soft spot in my heart (head?) for budding bands and the hardships they face.

Besides, I kind of like the Blood Trolls. There is an urgency and downright belligerence to their music. They’ve got attitude. They make me laugh!

Furthermore, when Ryan said his mother––succumbing to complaints from her conservative friends––wanted him to change its name or quit the band, I realized that the First Amendment was at stake here. So what if the band’s moniker offends the religious right of our community? Isn’t that what rock bands are supposed to do?

During a recent interview, lead songwriter Ryan shed some light on the band’s raison d’être for me. “I call it ‘power violence,’” he said. The lyrics of his first-penned composition, “Pay the Toll,” back up this characterization:

“Knee Deep in Barbed Wire,” “Charge of the Warriors” and “Sparkle Motion” are Ryan’s other songs performed by the Blood Trolls. It was after five minutes into this set at the Boys and Girls Club that their first gig was terminated; bands are no longer allowed at the Club. Desperate to play, the band members began calling their friends to see who would be willing to accommodate them. That’s when my home entered the picture.

My adult friends think I’m stupid or crazy, citing their own experiences allowing their children to sponsor bands whose performances inevitably degenerate into wild, drunken raves that end with trashed or stolen property. However, in contrast to their on-stage demeanor, the Blood Trolls are a group of polite young men who are always effusive in their appreciation for getting to play in our home. Only two items have been broken during Blood Trolls performances: a wooden spoon that was requisitioned as a drumstick and a glass cabinet door that got too close to the mosh pit. Fortunately, no one was hurt by the shards, but I did put the kibosh on moshing after that.

On the other hand, I’ve gained new admiration from my sons and their friends. “I can’t believe you’re letting the band play here,” they say during these concerts. Many of them make it a point to find and thank me—not an easy task since I hole myself up in my room and rarely leave while the action is on. Yes, I have found cigarette butts and wine cooler bottle caps strewn about and someone let my pet snake out of its cage once. Then there was the time I encountered a stranger emptying his unidentified drink into the aquarium, but the fish survived—although they’ve since added a rather unique sidestroke to their swimming repertoire.

I never thought raising teenagers could be so much fun. I expected surliness and argumentativeness. What I didn’t expect was this feeling of aliveness that allows me to experience the best part about being a teenager all over again, without the concomitant angst. So, when Ryan tells me “thank you for letting us play in your house,” I reply, “No, thank you, Blood Trolls.”