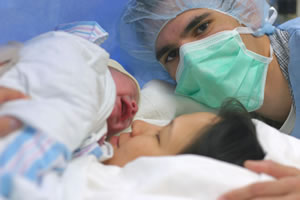 I will start out by telling you that my youngest child is now old enough to vote. This is a matter of some amazement to me. There is just no way that I am old enough to have a son that old, let alone his brother and sister who are even older. I am sure that there has been some mistake in the accounting; someone has made an addition-subtraction error. It’s easy to do you know, add five, carry two, subtract nine and what do you have?

My wife insists on pointing out that if I were really the age I claim to be, my oldest child would have been conceived when I was about three years old. I accuse her of cradle robbing and she gives me that look that all women have perfected. You know the one that says, “You and I both know you are an imbecile. Let’s not make it any more obvious that we have to.”

Age of course is not really the issue. I was present when these children were born. Yes, I was right there in the room. I held them, more or less within moments of their birth. They were so small I could tuck them under my arm like a football. When we were going to have our first child I was terrified that I was going to make a mistake but mistakes are part of the process.

My first parenting mistake was not entirely my fault. Society played a large role in it. Perhaps I should explain. I come from a large family. I have three brothers and two sisters. I am absolutely certain that my father did not attend the birth of any of us. He did what fathers of that generation always did; he waited in the waiting room with all the other prospective fathers. It was a more civilized time.

But now society has changed. When my wife was about six months pregnant with our first child she told me that she had signed us up for a birthing class. I told her that I thought that it was a wonderful thing. That was a habit of speech I developed back in those days. My darling wife was going through a lot of hormonal fluctuations, so my standard answer to anything she proposed was that I thought it was wonderful. You may think that is cowardly of me, but a woman going through hormonal shifts is not a pretty sight. She could go from happy care free through sadness and depression completely on out to Wicked Witch of the West and back in less than ten minutes. It was suicide to oppose her.

But I would have wriggled out of the birthing class thing, had I known that the whole plan was for me to be in the delivery room with her. I had always assumed that the actual birth was sort of her part of the process. I helped with the start up and I was perfectly willing to rub her back and feet when they hurt. I was also willing to help her into to the car and drive her to the hospital when the blessed arrival was eminent. At that point my participation should be over, after all what could I do in the delivery room except be a third wheel?

But nooo, that’s not the way it is done now. I was supposed to be the birth coach. This is not at all what it sounds like. The birth coach does not set the strategy for the team. He does not send in the plays from the sidelines. He does not even get to choose the lineup or start the two-minute drill. He is not a coach at all. He’s a cheerleader. The women who are in on this conspiracy, decided that cheerleader did not sound masculine enough to sucker in the unsuspecting men so they called the position” ‘coach’”.

I went through the entire course, four weeks of sitting on a mat coaxing my wife to breathe, as if some time in the next three months she would suddenly forget how. I agreed to do it because I was, after all, going to be a father. Besides, I had already learned the most important lesson on how to stay in a happy marriage. It’s not any BS about “Yes, dear”. The secret to a happy marriage is to allow your partner to have his or her way when it is very important to them, especially when it’s not that important to you.

So, I went to birthing class. I became an expert at holding her hand and telling her she was doing a wonderful job of breathing. Finally the great day arrived. I knew it was time. I was kneeling on the floor in front of her, massaging one of her feet when her water broke. Like a dam bursting I was sloshed from my chin to my knees. To say I was astonished would be understating the case by a considerable margin. The look on my face must have conveyed that level of astonishment because my wife, in the midst of her own discomfort, burst out laughing.

We made it to the hospital where I was sponged off and gowned up and led back into the delivery room. I won’t bore you with the details of the next twelve hours, of the endless repetitions of breathe, breathe, breathe. Or of how Lori, the natural childbirth convert, who stated many times that we were going to have this child naturally, broke down after four hours and started asking for drugs. The nurse talked her out of it saying, “You’re doing a wonderful job. You will always regret it if you give in now.” When we reached hour eight of labor, during one of the moments between contractions, Lori called me over and motioned for me to bend down over her. I completely misread her intentions and kissed her gently on the lips.

She grabbed me by the shirtfront, pulled me down so that my ear was next to her clenched teeth. “This is your fault.” She said. “You better get them to give me some drugs if you know what’s good for you.”

I said. “How can I get them to give you anything? Nobody here listens to me.” She made a horrible grimace and her voice came out like the demon in the “Exorcist”. “Just get them or else.” I stumbled back as she released me and hurried over to lobby for powerful painkillers, knowing that if I failed, I might as well join a monastery.

A spinal tap was done and as some of the pain faded, the demon went back into hiding. The labor continued for another year or so and finally the doctor decided to do a C-section. I followed them into the operating room and stood beside my wife, letting her squeeze my hand during the contractions. Why not, she’d been squeezing my hand for the last eight hours and the bones had already been fused together so I figured that I probably would never be able to play the piano again. It was going to be worth it to have a baby; besides I couldn’t play the piano, anyway.

I was still just standing there holding her hand when the nurse walked over and said, “Hold out your arms.” When I did she dropped this slimy, bloody little lizard like thing into my arms. I looked down at it as the nurse said, “Congratulations, this is your daughter.” I remember thinking this doesn’t feel like I thought it would. Then I heard the nurse say, “Lookout, he’s going down!”

I woke up with one nurse holding ammonia capsules under my nose while the other nurse carried my screaming daughter to the nursery. I had not made a good first impression on her. Fortunately babies bounce. She was unhurt physically but it did take quite a bit of convincing to make her believe that I could hold her up safely. You wouldn’t think a baby that age would hold a grudge like that. I still can’t believe that she’s almost 26 years old. There must be some mistake. I seem to have lost at least ten years around here somewhere.