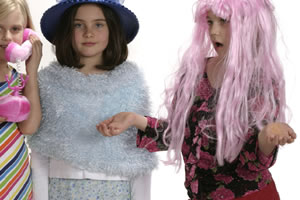 I empathized with my short-haired child. Why indeed? Audrey Hepburn, icon of femininity, was known for her pixie cut. And then I wondered, “Wait – why do I always have to be the mom?” I suddenly realized that I’ve been typecast and it was time to branch out.

Children realize where we moms fit in the scheme of things. It’s fun to be mommy and feed the baby, but when we play school we want to be the teacher – not president of the PTA. Given the choice between Mama and nomad princess warrior, adventure wins every time. When my children started to be more independent, I wanted to be an adventurer, or at least to be able to bring home a paycheck. So I traded the t-shirt for an ironed blouse and went out looking for a job.

I should have been wiser. Had I looked at my résumé with a more critical eye, I would have realized that my long list of volunteer accomplishments was a dead giveaway. I was trying to be the swashbuckling executive, but my interviewers weren’t buying it. “You have interesting experience, but I don’t see a real career path,” observed one marketing exec (and mother of two). I admitted that she was right, but tried to highlight my “transferable skills” of project management, budgeting and supervision. The interview was mercifully short, and I was startled to find myself clutching a consolation prize of product samples outside the front door I had entered just moments before. I had other unsuccessful interviews and realized that even with my new costume, I was still the mom.

What is it about our not-so-secret society of motherhood, and how do they know that we are members? When I was in my early twenties, I remember a friend remarking that an acquaintance with three children had “mother” written across her forehead. I displayed a knowing look, but in reality I knew nothing and admit that I don’t know why I chuckled with slight disdain. Years later, I wonder: do we have distinguishing marks, or is it the wash-and-wear uniform? Maybe the extra napkins or band-aids tucked into the purse are the giveaway. The trail of “ducklings” that follow you through the library or supermarket make motherhood obvious, but I know that even when I’m unaccompanied by my teenagers there’s something about me that marks me as a mom.

One day, after months of fruitless job hunting, something inside of me snapped. It just wasn’t fair. I was tired of the same game so I decided to play school. I enrolled in a university nearby and decided to change my MOM to an MBA. Classes started and I loved my new role. It was great to be independent, responsible only for myself, and I studied and learned. In my online class my discussion board postings gave knowledgeable analyses of management situations. No one needed to know that my “employee” was my fourth-grader and my “colleague” was 16. The wisdom and experience gained was the same in both situations.

Being a student was rewarding and exciting and I thought for a moment that I had broken free of my stereotypical role. Then came the group project. Our team consisted of four members — three businessmen and myself — and we were assigned to each research and write one section of an industry analysis. It sounded simple enough — very independent — until we realized that one member needed to coordinate the project and combine the separate sections into a consistent report. That revelation was followed by a heavy moment of silence, and I couldn’t stop myself from stepping up and volunteering to take the lead. A week before the due date, as I e-mailed guidelines and reminders, I could almost hear myself saying, “…and brush your teeth and pee, boys — we’re leaving in 10 minutes.” It had happened again. Even when playing school I was still the mom.

Despite my experiences, I’ve decided I don’t really want to abdicate and give up my title just yet. I’ve earned it. I’d just like a little different twist and a chance to be a multi-dimensional character. How about “gypsy mama”, exciting world traveler? Or maybe “mom the inventor” or “U.N. Ambassador and Mother of Three"? I’ll put up with the demanding schedule and occasional lack of respect. I don’t even mind the planned obsolescence of the job, and celebrate the fact that my girls are growing into strong and independent young women. I just want to try something new.

So I’ve been thinking. This time can I be the boy?