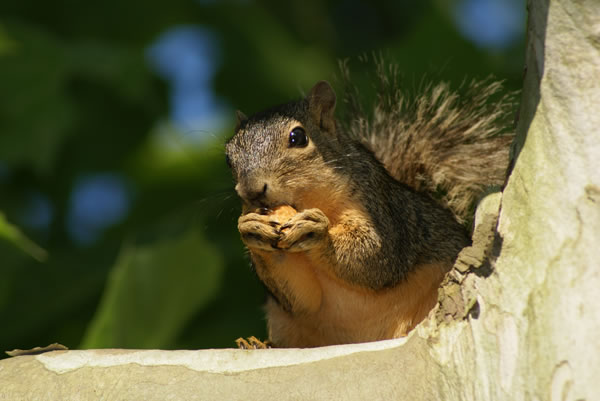 Sometimes life’s lessons are learned in the strangest ways. Perhaps it’s necessary. We might not recognize them if they came to us by more conventional means or they might not have the same significance. Lectures come to mind. Blah, blah, blah! An endless stream of words resounding in a tone that neither speaks of their significance nor is conveyed in a way that is like that “deer in a headlight” moment I had that fateful day.

I say “fateful” because I want to believe it so. It would be nice to think my “deer” was supposed to be there on the side of the road that day… that he was sent by some higher being. Only it wasn’t a deer but rather a squirrel, and a dying squirrel at that. Yes, my “deer” was actually a squirrel. But I’m getting ahead of myself, something I often do when I’m obsessing.

My story begins like most; a mundane morning which included running errands. The day was beautiful; an autumnal crispness was in the air, leaves were just beginning to show their fall color and squirrels were scampering about collecting nuts.

No! I didn’t hit the squirrel. Thank God! But I did drive by a squirrel who had been hit. He was on his back, his legs twitching about as if he was struggling to get up.

And then the praying began, intercessions on the squirrel’s behalf. Please. Let him live. Or at least let him get to the side of the road before being hit again. Or maybe I should ask he be spared a painfully long death and put out of his misery. Could I actually pray he be hit again to end his suffering? Ugh!

I was that desperate. I prayed for all these things as I drove away from the scene of death. My personal prayers soon turned to more traditional ones. A series of “Our Fathers” and “Hail Marys” followed and although they didn’t invoke the same passion, they counted just the same. Would they be heard?

That question led to one more and it was for me. Was I listening?

Here I was, praying for this animal, insignificant to some but very important to me at that moment. This animal had touched me, brought me to tears and caused me to turn to a higher power on his behalf. An animal?

My son’s face flashed before my eyes and my heart took a sad turn. We had been in a cold war of sorts for two days. He was in his senior year of high school and a good kid. Smart, nice and, well…good.

Like most teens, life was presenting many changes. College loomed ahead. I, like most mothers, didn’t think he was doing enough, or fast enough. I was obsessing over his lack of initiative in scheduling college tours. After all, decisions had to be made!

My obsessing wasn’t unusual. I was a classic “obsessor” and quite good at it. In fact, I excelled. I had often promised to change. Forecasting the future was always filled with doom for me. I never forecasted good things, only what I knew was going to go wrong. Projecting my worries on my son did no good but I couldn’t help myself. I had to take control of the situation or else it wouldn’t get done. Right? Wrong!

My urging was met with indifference. There was nothing to worry about from my son’s perspective. Everything was under control. Not in my eyes.

The story of our fight is long and, because I’m telling it, one-sided so I will spare you. Suffice it to say, we argued about his lack of initiative. I thought he had none, he disagreed. I threw up my hands and said he was “on his own.” I wasn’t going to nag him anymore. Right! I wish and I’m sure so did he.

A cold war ensued and lasted two days. It ended only because of my squirrel. As I drove to the post office, I thought about how upset that squirrel made me. How I so passionately prayed for him, but hadn’t done so for me or my son. How could something that had so little consequence in my life have such an effect on me? And why had I let stubbornness and pride lead to this cold war with a boy who meant so much more. He was my life, I gave him life.

It was easy, I told myself. With this squirrel, only a prayer had to be said and I was on my way. It wasn’t that easy. That squirrel stayed with me. With each errand completed, I wondered if he was still alive, still twitching and struggling in the middle of the street.

He became a symbol to me. A symbol of how easy it is to care for a stranger but ignore the ones we hold dear. My prayers changed or grew. They now included my son and me, too. I needed the strength to swallow my pride and apologize and I wanted him to see that my obsession was only concern. The ranting of a mother who wants only the best for her “little” boy who is no longer “little.”

Of course, my story has a strange ending. I couldn’t help but take the same road home even though I could have taken another road and avoided seeing my squirrel. But I just couldn’t help it. I had to know if my prayers were answered. Had he been spared a painful death and succumbed? I drove at a slow pace, afraid he had twitched and struggled to the middle of the street. I drove and drove until I was sure I passed the site of our fateful encounter. Nothing! He was gone…or had he ever been? I like to think he was sent, an angel to teach me a lesson.

I hope my prayers are heard, but more importantly, I hope I have truly listened. After all, it is easy to pray for something but difficult to put them into action. I am a work in progress, and there’s a lot of work to be done.

Wish me luck and, of course, pray for me and anyone else who needs it, even a silly squirrel. And while you’re at it, pray my son schedules those college tours. I just couldn’t help myself. Like I said, a work in progress.