A Gourmet Wannabe Drops Out 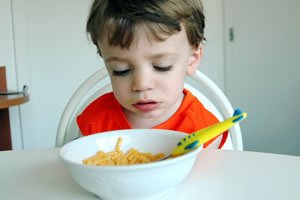 All those helpful cooking recipes in parenting magazines designed to get kids to eat healthy gourmet meals? They lie. Those glossy photos depicting cute little moppets happily chowing down on exotic feasts like sushi, asparagus, and roasted bell peppers with hummus; they’re secretly airbrushed and Photoshopped to hide the chicken nuggets, chocolate shakes and French fries.

Having spent years attempting to dazzle my children with things like risotto and fish tacos, I can only conclude that I will have to be patient until the adult genes kick in, and their food preferences expand beyond plain pasta, carrot sticks, pancakes and fast food. I have missed the window of opportunity to make my children sophisticated gourmets for their age.

How did I go wrong? I fed my babies gourmet and organic baby foods, fresh fruit and small crushed versions of whatever their father and I were having. We felt like such good parents when our oldest loved pasta carbonara or our second enjoyed eating French onion soup at the tender age of two.

The schedule became more exact in our lives and lunch was rushed, hence fast food entered the equation as a savior. By the time our third child showed up on the scene, I was in a habit of serving fast food once a week for lunch and pizza every Friday by delivery. Some weeks, life would get crazy, and fast food came to the rescue again. I also began to take short cuts to eliminate time in the kitchen with frozen waffles, pop tarts, frozen bagel pizzas, soft sponge-like white bread, boxed cheap pastas with powder sauces and canned soups.

I didn’t realize we had a problem until we went to visit the grandparents that summer.

My daughter announced she wanted macaroni and cheese for lunch. Her grandfather put on a pot of water and got out butter, milk, cheese and spices. She watched suspiciously.

"Where’s the blue box?" she demanded.

"This is special macaroni and cheese. Grandfather is making it just for you," he explained.

She looked at the ingredients. She was struggling. Being a rather diplomatic child, she helped him cook. Pouring and mixing and sprinkling, she was having tremendous fun. I looked on with great love at my father-in-law, drinking in the image of him and my daughter cooking together. She even beamed at me, "I’m making macaroni and cheese, Mommy!" It was just like in those gourmet magazines.

After setting the table, it was time for the moment of truth. My daughter sat down and her Grandfather set a plate before her, steaming with a beautiful serving of fresh homemade macaroni and cheese, glossy picture perfect. She took her fork, blew on a noodle or two and daintily took a bite.

"This isn’t macaroni and cheese!" she said as she took the noodle out of her mouth in a hurry and wadded it in a napkin.

Stupidly, I tried to do damage control.

"Maybe that piece was too hot."

She stapled her arms to her sides and refused to pick up the spoon. Not taking the hint, I tried to spoon-feed her myself. For a four-year-old, she had amazing jaw muscles. I gave up and she was allowed to have bread with butter while Grandmother drove out to the store to get the "right kind" of macaroni and cheese.

Fast forward six years and I still haven’t learned my lesson. The kids moan when I get a new cooking magazine in the mail, as they know experimentation night is coming. Slow roasted chicken with cream gravy was a complete flop. Sautéed fresh vegetables with a peanut butter dipping sauce was also a failure. No soup has ever made it past the three-bite test and pastas with any green things on them are still viewed with great suspicion. No child likes anything with fish.

To survive this bland mob mentality, I have adopted a cold cereal rule. If you eat three bites and you hate it, there is always cold cereal. However, it means I wind up eating a lot of leftovers for lunch.