A Call to Arms and Breasts 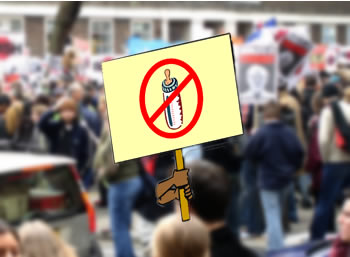 When I was in high school, I knew people who stood on the corner across from the mall holding signs that read, “Fur is dead.” Friends in college joined local chapters of Amnesty International and attended war protests. I was interested in volunteerism and serving the community, but I never really considered myself an activist. I didn’t feel really passionate about any one thing. I was more of a “go with the flow” type of person. I started working at a soup kitchen after buying a fake i.d. from the volunteer coordinator; I joined the Peace Corps after seeing “Dirty Dancing” in the theater five times and learning of Baby’s plans; I decided to get a Masters Degree after a friend told me about an interesting program; and then an internship turned into well-paying job helping people. I married a man I met in the Peace Corps, bought a house, got some dogs, and planted a garden. I just did my thing and everything seemed to work out fine for me.

When I became pregnant, everything changed. I wasn’t comfortable with status quo regarding pregnancy and birth. The time I spent in Cameroon, West Africa as a Peace Corps volunteer had affected me in ways that I hadn’t realized. I had never considered the politics of parenting in our country until a friend started midwifery school and opened my eyes to a world I never knew existed. I suddenly found it difficult to just go with the flow. I found that the ideas I had for myself didn’t mesh with the ideas of the people around me, especially my family. I found that every decision I made, starting with my homebirth, was challenged. I found myself in a position of either keeping my decisions to myself or working hard to educate others on why I was choosing to be “different”. I chose the latter.

On April 21, 2002, I gave birth to one son and one mother. I saw this as a chance to start over, to live purposefully, and to think about my actions.

When it comes to parenting, I try to shield myself from negative messages and images that pervade most mainstream media. For instance, I do not watch shows like “Maternity Ward” or even the seemingly benign “A Baby Story” on TLC. I quit watching “Friends” after Rachel’s ridiculous and completely unrealistic birth episode. I don’t read the parenting magazines in the pediatrician’s office and I recycle the formula companies’ advertising rags parading as “magazines” that appear in my mailbox. I’m not interested in what Dr. This or Dr. That has to say about everything that could go wrong in my pregnancy, my child’s first years, etc. I like to talk to real people, read zines (self-published “mini” magazines), and do my own research. I belong to a few “alternative” online parenting communities and I have tried to build a strong support network for myself in my community. This has made a huge impact on my life and given me the confidence to parent in the style that suits my family.

I don’t like it when people give me unsolicited advice and I disagree with a lot of commonly accepted/unquestioned practices. In addition to having a homebirth, I did not circumcise my Jewish son, I don’t vaccinate, I cosleep, and I plan to breastfeed until my son decides he is ready to wean. I know that these things may make me seem like a hippie (or worse), but I’m probably not that different from you. I doubt you could pick me out of a crowd. If it is a weekend, my avocado stained “Lactivist” tee shirt, pulled up over my breast, with my insanely cute 15-month-old son attached to my nipple might give me away.

The United States has made some major strides in the past couple of decades. Formula companies have been required by law to state on their products and in their ads that “breast milk is best”. Laws have been passed requiring employers to provide time and space for women to express milk at work. Breastfeeding is slowly but surely coming back in fashion, even celebrities are doing it. However, breastfeeding rates are still alarmingly low and in general, breastfeeding is viewed as primarily for babies. Close your eyes and think about breastfeeding. What image comes to mind? A smiling woman holding a newborn infant? Well, I have news for you, breastfeeding isn’t just for babies. Toddlers and older children do it too.

The American Association of Pediatricians (AAP)recommends exclusive breastfeeding for six months and continuing breastfeeding for at least one year, while The World Health Organization (WHO) and UNICEF advocate breastfeeding for two years and beyond. There is no agreed upon world average age for weaning, but many cultural studies detail a weaning continuum from birth to ten years (do not adjust your glasses). The United States is one of the only countries to wean its children by their first birthday. It is up to each nursing duo to decide when it is time to wean. Some women choose to breastfeed for six months, some for two years, some for four or more, and some not at all. To each her own, I say. However, women in this country need to be given more information and more support.

I doubt there’s a person out there who hasn’t heard a sensationalized news story about “the horrors” of a woman nursing her three year old child. Extended nursing is often portrayed as a form of child abuse or a sign of the mother’s unfulfilled emotional needs. (If it isn’t an extended nursing story it’s a story about a child sleeping in his/her parents bed, but that’s a different rant.) Stories like those make me angry and sad. They discourage others from nursing their children past an “acceptable” age or encourage them to hide their nursing relationship. This serves to reinforce the image of breastfeeding being for tiny newborns only. For those of us choosing to nurse our children for a year or more, we must be proud and we must be seen.

I wish that all the women out there who are nursing their infants, toddlers, and older children could feel safe to join me in public displays of nursing. I want lactating women everywhere to nurse their children wherever and whenever they want and for it to be perceived as completely normal and natural. It can happen and it starts with me and you. Lactivists unite!

Are you a Lactivist? Take our quiz.